News of a potential offer of a tariff rate quota for 85,000t of beef in the Mercosur (South America) negotiations has triggered a dismayed reaction from the ICSA’s (Irish Cattle and Sheep Farmers’ Association’s) Beef Chairman Edmond Phelan.

Phelan was reacting to calls from French MEP Michel Dantin who has demanded that the EU Commission clarify if rumours about such an offer are true.

“The ICSA is extremely concerned at this. If such an offer is tabled it would have a very severe impact on European beef markets and would hit Irish beef exports particularly hard,” the chairman said.

“The offer is even more generous than the 78,000t that was on the table earlier this year but which had to be withdrawn.

It is hard to comprehend that the EU Commission is already forgetting the Brazilian beef scandal of earlier this year and appears willing to make beef the sacrifice for other sectors.

“The EU is showing scant regard for the pressure the Irish beef sector could encounter depending on the outcome of Brexit talks,” Phelan added.

“We currently export some 270,000t of beef to the UK annually, which could potentially be looking for a home in Europe.

“The speech last week by Commission President Jean-Claude Juncker was a very troubling insight into the thought process of the EU – which is tending towards more free trade at the expense of the European livestock sector,” the chairman noted.

“The ICSA is calling on Commissioner Hogan to oppose this offer. We must see a strong line against it from Taoiseach Varadkar and Ministers Creed and Fitzgerald.

We also want to see Irish MEPs take a strong line on beef in the Mercosur talks.

“There is no silver lining for EU agriculture in a trade deal with South America, or any other food-exporting region, and this must inform the position of all Irish representatives,” Phelan concluded. 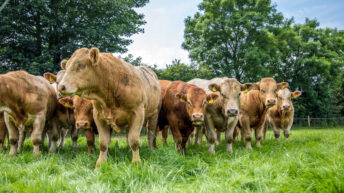