Plenty of sunny spells forecast for day two of Balmoral

It’s day two of the Balmoral Show and the Met Office has forecast for plenty of bright or sunny spells once any early low cloud has lifted.

It looks set to be a good day sunshine-wise with only isolated showers and maximum temperatures will reach 20.

The outlook for tomorrow, Friday, is mostly dry however it will turn cooler as the winds turn to a northerly direction.

There will be the odd shower but with some sunny spells also and it will be a breezy on Friday.

Weather presenter with the BBC, Cecilia Daly has tweeted that today looks set to be the pick of the week to go to the show.

More dry than not at the #BalmoralShow this week – tomorrow looks to be the pick of the three @balmoralshow pic.twitter.com/YeaCxIoZcP 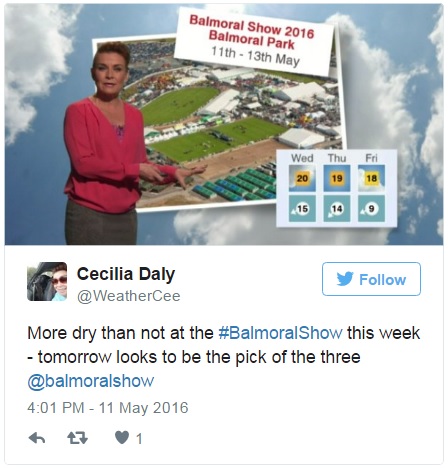 Yesterday, there was good sunshine for the afternoon at Balmoral after the clouds cleared from the morning.

Getting To The Balmoral Show

Large crowds are expected at the 148th Balmoral Show which takes place this week at Balmoral Park.

Therefore, it’s important to plan your route to the showgrounds in advance and to comply with local traffic restrictions.

Driving To The Balmoral Show

If you’re planning on getting to the Balmoral Show by public transport, you can find out more information here.

How to plan the best route to the 2016 Balmoral Show