In terms of supplies at factories Bord Bia outlines that for the week ending April 12th, total pig supplies at export meat plants stood at around 59,000 head up around 4,000 head on the corresponding period last year. Cumulative supply was up around 5,000 head on the same period in 2013 standing at around 835,300 head. Year-to-date supply of finished pigs is on par with the same period last year.

There has also been little change in the trade in our main markets according to Bord Bia. In Britain, trade was reported as firm with a slight increase in prices. In France, little change was reported with a further decrease in supply. It is expected that demand for grilling cuts will increase as the Bank Holiday weekend approaches. A decline in supplies is expected due to the upcoming Easter period. In the Netherlands the price was €1.62/kg.

Click below to see Irish pig prices year to date: 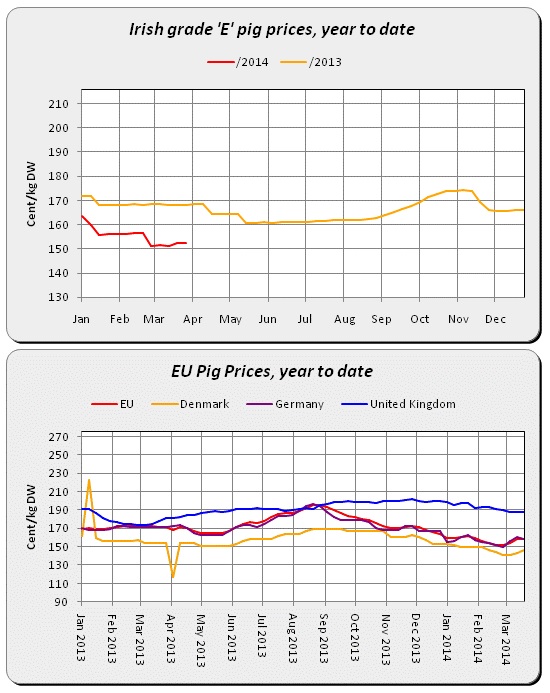 According to the Minister for Agriculture, Food and the Marine, Simon Coveney, there has been ongoing contact at political and technical level between the EU Commission and the Russian Federation but to date no solution has been found which would satisfy both parties to the dispute.

In response to a parliamentary question recently he said: “The Russian Federation continues to reject the internationally recognised principal of regionalisation which was implemented by the European Union following the disclosure of African Swine Fever (ASF) in Lithuania and Poland.”

“I spoke on the matter at the March Council of Agriculture Ministers’ meeting in Brussels where I confirmed that Ireland supports the Commission approach to protecting the OIE based regionalisation approach to managing animal disease outbreaks.

“I urged fellow Member States to continue to act as one on this issue and to show support for the Commission`s approach to dealing with the current difficulty. I also highlighted the fact that time is running out for producers and processors in the EU and I encouraged the Commission to step up its efforts to find a solution soon. This solution needs to bring to an end to this unnecessary blanket ban on EU product while assuring the continued protection of the EU against the threat of animal disease.”

The Minster outlined: “Since then matters have not improved and last week the EU launched a legal challenge against Russia at the World Trade Organisation (WTO) on the basis that the Russian ban was disproportionate and unfairly harmed EU pig farmers. The WTO dispute procedure provides for both sides to find a solution within 60 days after which formal litigation commences.”