Pics: UK farmers take to the streets of London to protest 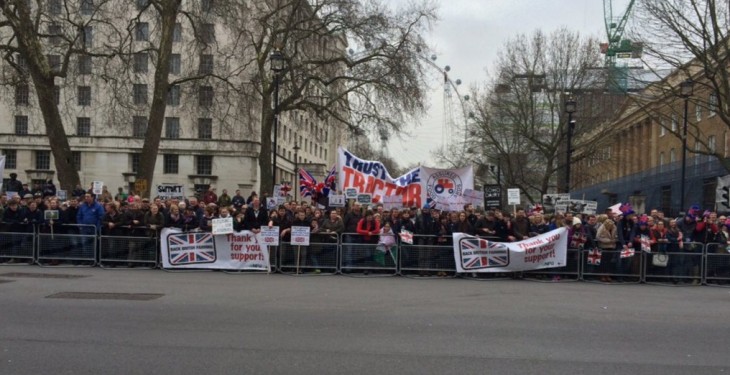 Hundreds of farmers from across the UK made their way to London today in protest against the low prices they have been receiving for their produce.

Farmers for Action (FFA) led the protest, where its Chairman David Handley, presented the Prime Minister, David Cameron, with a letter from the farmers.

Handley delivered the letter to Number 10 Downing Street, which outlined the farmers’ concerns about the UK’s agriculture industry.

Pictures of the protest have been posted on Twitter, with the FFA tweeting this great photo.

Sandra Stalker, a farmer in the Lake District, tweeted this shot of one of the younger participants at the protest in London.

She also tweeted this photo of a sign at the protest which reads ‘udder madness coming soon to a museum near you… British dairy farmers’.

Cows and sheep made an appearance at the protest today in London. The moderator of the Livestock trailers Twitter account posted this shot of Maple the cow and two sheep.

#F2L #nofarmersnofood #FarmingToLondon Maple and the two sheep from Belmont Farm Due to lead the march pic.twitter.com/CMvXcbOH5u

The North Somerset Young Farmers’ Club (YFC) tweeted this video of the protest outside Number 10.

The YFC captioned it ‘Mr Cameron we’d like to talk to you, can you hear us?’.

Mr Cameron we'd like to talk to you, can you hear us? Outside Downing Street #FarmingToLondon #F2L #nofarmersnofood pic.twitter.com/tMVvQYMN8b

Steven Crowe, a Northern Irish vet working in Cheshire, tweeted this picture of the protest.

It shows a range of the banners and posters brought to London.