Over the past week French farmers have blockaded roads, set pyres of tyres on fire and set pigs lose in supermarkets in protest of the low prices they are receiving for their produce.

The French Agriculture Minister Stephane Le Foll has declared an agricultural crisis and has said that figures collected by his department show that some 23,000 French farmers are on the verge of bankruptcy.

Earlier this week over 1,000 French farmers set up road blocks on six roads between Germany and France and another 100 blocked a road on the Spanish border preventing trucks bringing food into the country.

French farmers, hauliers and people who are affected by the protests have been tweeting their views of the protest.

Jon Kelly is one such person and at the time he tweeted this picture he was three and a half hours on a motorway stuck behind French farmers and he said he would miss the crossing back to the UK. 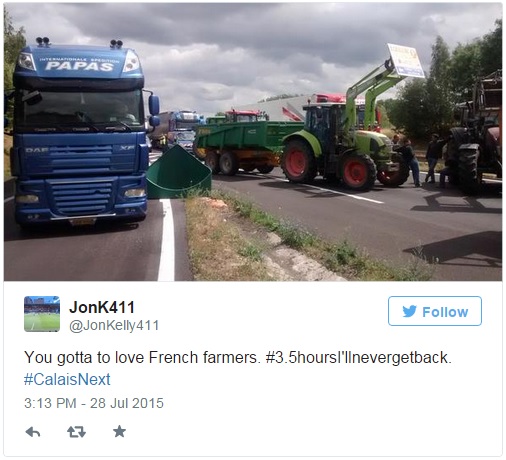 A video by Russia Today is being shared a lot on Twitter. It shows pyres of tyres on fire, with more tyres being dumped for burning.

The video shows pyres being burnt outside Lactel, the French-owned company by Lactalis.

Franck Sander, president of the local branch of the National Federation of Agricultural Holders’ Unions (FDSEA) said that they made a truck carrying Babybel [cheese] turn back.

“Consumers think this is French, but the cheese comes from Slovakia,” he said.

The news website Telesur has tweeted an image which was sure to be commonplace at border roads in France over the past number of days.

Some of the farmers have ransacked trucks, destroying the produce onboard destined for French supermarkets. 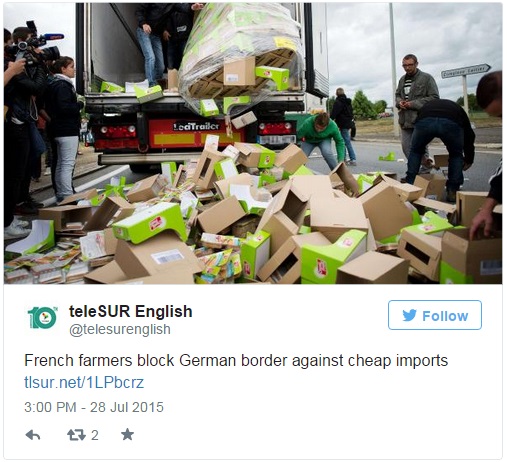 Farmers have extended their blockade to Luxembourg, with one Twitter user saying that there is 13km of stationary traffic and at least two hours delays due to framers blocking the A31 from France to Luxembourg.

The road runs from Luxembourg between Thionville and Metz in France. 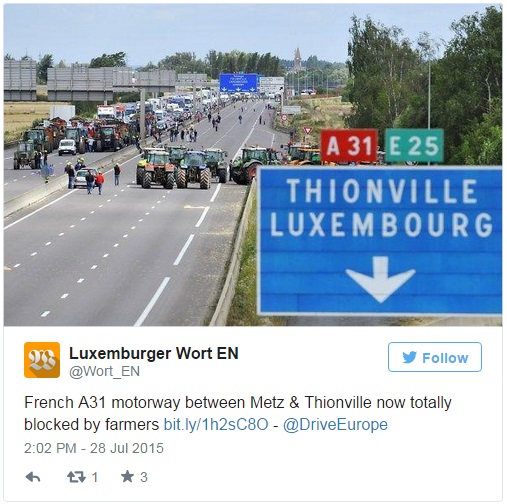 French farmers are warning that there will be further protests. Sander has also said that from now until the end of August, things will be happening.

One French farmer has put a sign up on his tractor which translated says “Hollande, you are going to kill us”. While others have signs which say “farmers in anger”.

Twitter user Brice Bachon said that pig farmers dropped their pigs off in a supermarket in Agen.

He said that they repeated this in three supermarkets in the area. 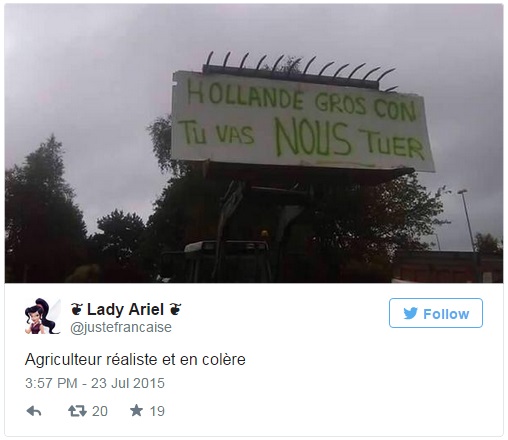 Farmers have also let pigs loose in supermarkets in protest against low pork prices they are receiving. 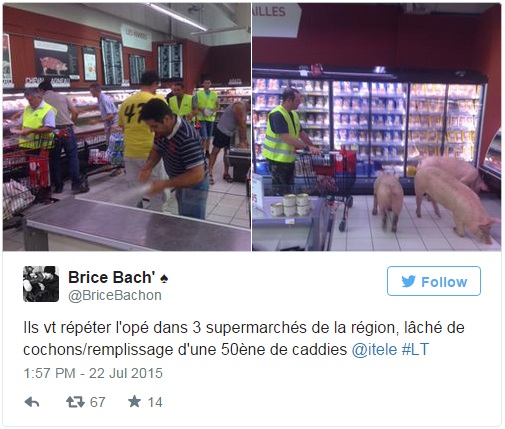