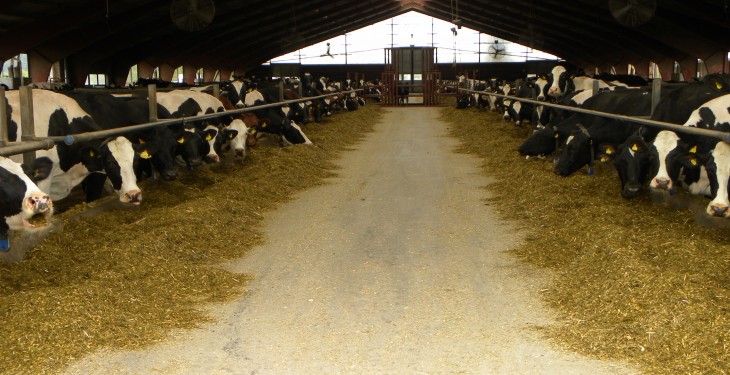 Some 720 dairy cows are milked three times a day on the Skottorps Sateri dairy farm in Sweden which is run by Lars Inge Gunnarsson.

On average each cows produces 10,900L/year and the farm sends 7m litres of milk a year, with the bulk of it being sent to Arla.

The cows on the farm are made up of Holstein (80%) and Swedish Red & White (20%). They are fed on a mixture of silage, maize and grain twice a day.

The cows are milked three times a day by cluster milking and while some farms of a similar size may have robotic milking, Lars Inge is “very satisfied” with his system.

Lars Inge said that the end of milk quotas will impact milk production in Sweden.

For sure, I think we have already seen the European dairies are worried about increased production.

“It is also increasing in other countries around the world. Everyone is a little worried; a small surplus on a certain market will have an impact,” he said.

In total there is 2,340 cattle on the farm and some 20% of the €5.5m turnover on the farm comes from meat production from Charolais on the farm.

A cheese-making operation was started 10 years ago on the farm and makes 300t of cheese each year, Ingmarie Muller-Uni (Lars Inge’s cousin) said.

All the milk comes from the farm and it is pasteurised, but not separated, so the cream also goes into the cheese.

“It has a 35% fat content and the facility produces mild to more ripened cheeses as well as speciality cheeses,” she said.

There is also a straw boiler on the farm which is used to heat houses on the land.

The farm also has a bio-gas plant which uses mostly maize and manure. This produces electricity and hot water for the dairy and houses on the property.