Picking stones just got a lot easier with this machine! 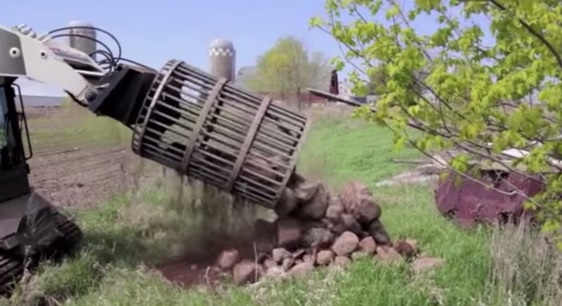 The Flexxifinger Quicker Picker Rock Picker is, according to its Canadian manufacturers, the world’s first rotary rock picker for skid loader use and allows farmers to pick rocks with ease.

Designed on a rotary combine, farmers can now pick rocks with ease, picking rocks two to three times faster than rock buckets and it will fit on any skid loader with a quick attach plate, the company says.

“Simply scoop, spin, and the rock is picked clean. Made of heavy duty steel and engineered with patented technology, the Flexxifinger quicker picker will last the average farmer a life time. Farmers can now pick rocks with ease, picking tough rocks that are barely visible.

“The quicker picker can be used by landscapers with freshly cleared lots, picking tree stumps, pieces of wood, rocks, tin cans, hub caps and any other debris in its way,” the machinery company says.

The barrow itself can hold up to a tonne of rocks, which the company says is three to four times more than the average rock bucket. The company says that with the rock picker you can gain an extra month of picking time each year. Farmers can use the rock picker even when there is two inches of frost, it says.

Take a look at the video of the rock picker in action: