Parasitic burdens: ‘Young stock and young grazers; they have had no exposure’

One of the topics up for discussion at a recent technical day – organised for the Teagasc Green Acres Calf to Beef farmers – was parasitic control during the first season at grass.

“The one thing to remember is the very first day at pasture is when calves are going to come in contact with worm larvae or whatever is on the pasture; it’s very important to remember that.”

Worm burdens or parasites are associated with lack of thrive, scour and also contribute to other diseases.

“If an animal has a heavy parasite burden, there is an increased likelihood that they will contract other viruses and other bacterial diseases which could result in a worse outbreak.”

Suzanne explained that by having an understanding of the parasitic life cycle, it helps farmers make informed decisions around dosing with wormers.

“Once coarse worms are ingested, it takes approximately three weeks to develop into adults and start producing eggs. Those eggs then come out in the dung and contaminate the pasture.

“Then it is very much dependent on the weather conditions and time of year. Mild, wet weather is the perfect weather for larvae development on pasture,” she added.

“It takes approximately three weeks for that larvae to develop into infective stages – it is very much dependent on temperature, moisture and weather conditions.” 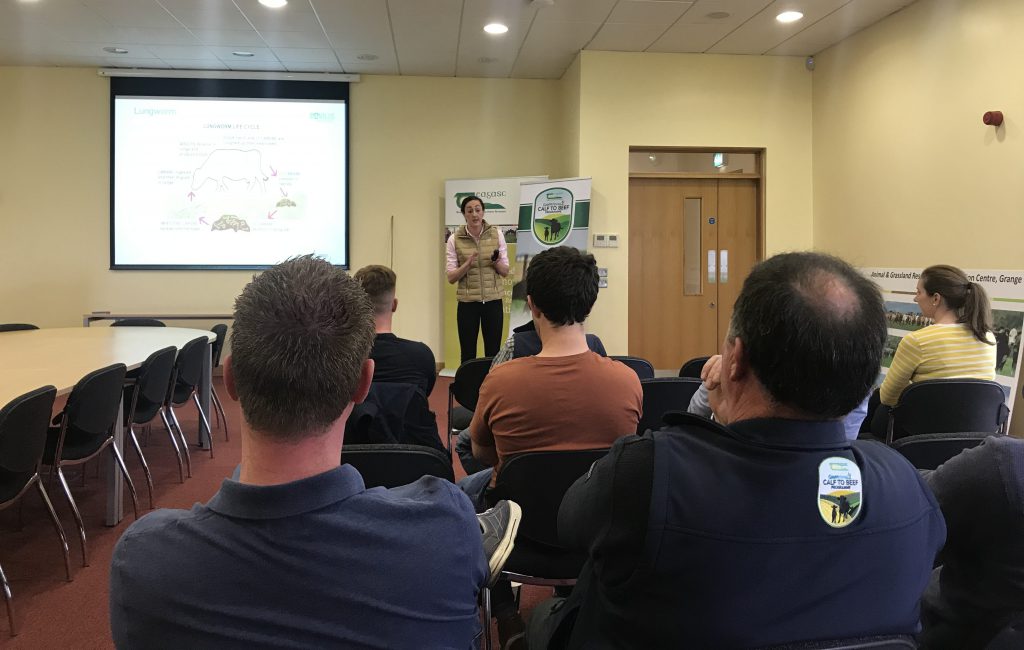 Continuing, she highlighted: “With ostertagia gut worms – towards the end of the summer prior to housing – instead of going through its normal development, it actually hibernates until the latter part of the winter.

“Then, for some unknown reason, these worms re-emerge; this can be a nasty infection that can lead to death. It is important to remember that some gut worms – especially the ostertagia type – can result in nasty infections.”

Suzanne noted lung worm was not a huge problem last year due to the dry and hot summer, but stressed that this year is different because of the mild winter and the larvae that were on pasture weren’t killed by typical frosty conditions.

“Lung worms – once ingested – pass out through the gut wall and into the bloodstream and travel to the lungs where they will develop into the adults; it takes about four weeks to develop into adults and produce eggs. 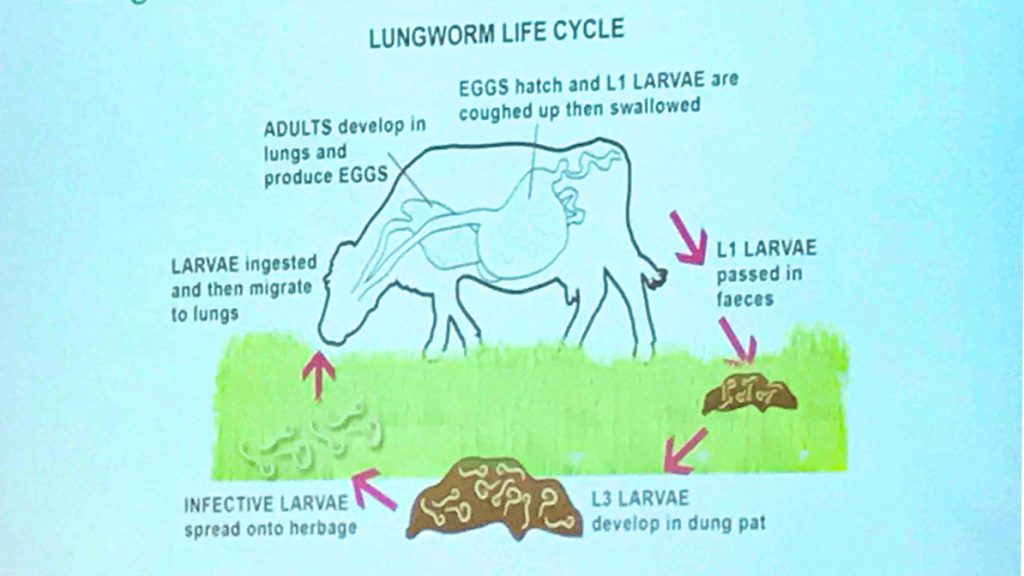 “Larvae is then coughed up and swallowed and these come out in the dung of animals on to pasture,” she added. “Lung worms take a much shorter time frame for the larvae to develop into an infective stage – it takes approximately one week.”

Suzanne explained that a big problem with lung worm in older animals is the lack of immunity developed from these animals by not being exposed to these parasites.

She said that immunity can develop very quickly, but some exposure is needed or it’s gone after a few months.

“Where possible, avoid putting young stock on pastures that have been continually grazed by young stock and where no calves were present during the previous grazing season; there could be a heavy burden in that pasture.”

She also noted that a good plain of nutrition and the appropriate use of anthelmintics – the white, yellow and clear drenches – are important measures when it comes to parasitic burdens. 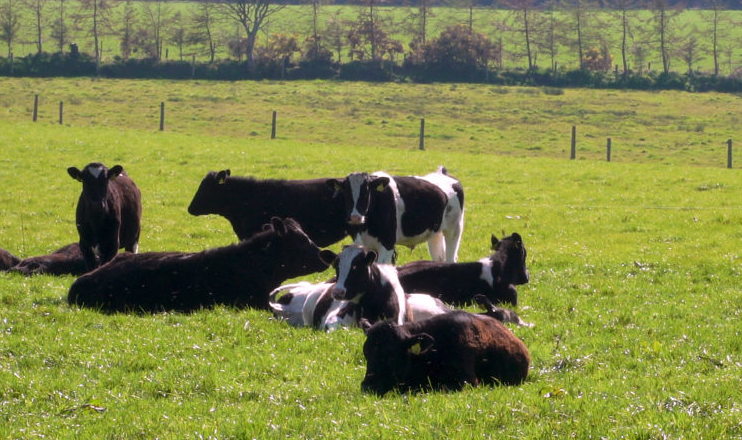 “We have to be aware of resistance to anthelmintics and use them responsibly. Farmers need to regularly monitor their situation with faecal egg counts and weighing to monitor weight gains.

“It is important to check the data sheet that comes with them and it will tell you how long the residual activity is for – all can vary.”

These wormers can be applied through injection, pour-ons or through a bolus. Suzanne recommends using injections as farmers are more likely to dose according to the weight of the animal. She also recommended that dosing be carried out on a dry day to avoid infections at the injection site.

“Farmers should always check with their vet. In addition, calves should be let out for three-to-four weeks before dosing. The next dose depends on what wormer was used and did it have residual activity, and also the weather.”

Concluding, she said: “Ideally, rotate between the different classes of wormers every so often to avoid resistance. Once dosed, farmers should avoid moving them to a new sward. If possible, leave them for 24-48 hours.”

'We need to spread 1-1.2 million tonnes of lime annually'