Ornua PPI rises for a fourth consecutive time this year

The Ornua Purchase Price Index (PPI), the monthly indicator of market returns on dairy products sold by Ornua, has risen for a fourth consecutive time this year.

The October the PPI increased to 95.9 points, which is the equivalent of 27.9c/L VAT inclusive, based on Ornua’s product purchase mix and assumed costs of 6.5p/L.

This latest increase reflects higher returns in the month across all main products, according to Ornua.

Compared to the September PPI, the October returns rose by 3.7 points. The PPI has steadily been rising since July, which was the first time it rose in 16 months. 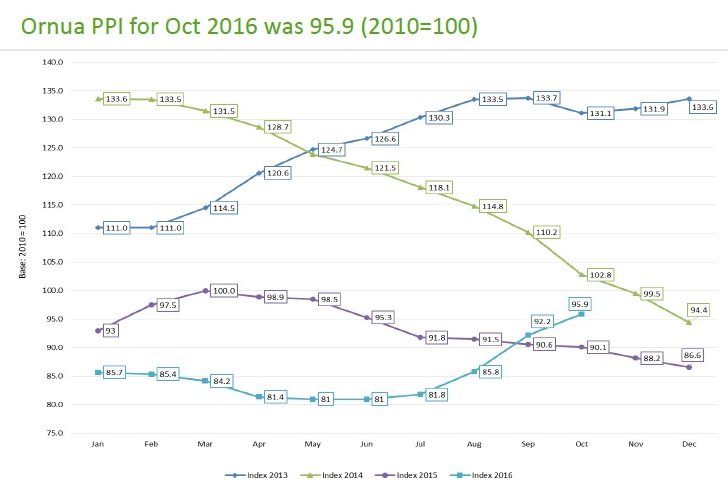 Over the coming days and weeks, co-op boards will be sitting down to discuss and decide on the October milk price.

The IFA Dairy Committee has called for co-ops to increase the milk price by 3c/L, saying that such an increase is both necessary and fully justified.

Such an increase in milk price would be in line with what Arla (+4p/L in the UK since August) and Friesland Campina (+3.75c/kg for November, and a total of 8c/kg increase since August) have been doing elsewhere in Europe, according to committee.

It also reflects increased Irish butter and SMP prices, as reported by the EU Milk Market Observatory, as well as strong EU commodity prices generally, and it will certainly translate into a further increase in the Ornua PPI for October, it said.

Dairy Committee Chairman, Sean O’Leary said that farmers are still receiving milk prices below production costs, and it is crucial that every last cent fast improving market returns make possible be passed back to farmers.

“While there are sizeable stocks of SMP in intervention, the EU Commission has a strong track record, as well as a vested interest, in releasing those stocks prudently, minimising any market disturbance.

“With average EU gross returns of around 35c/L before processing costs through all the month of October, a 3c/L increase is fair, and will set farmers’ prices up to more sustainable levels for the crucial spring,” he said.

Inquiry into Australia's dairy industry to look at competition between processors