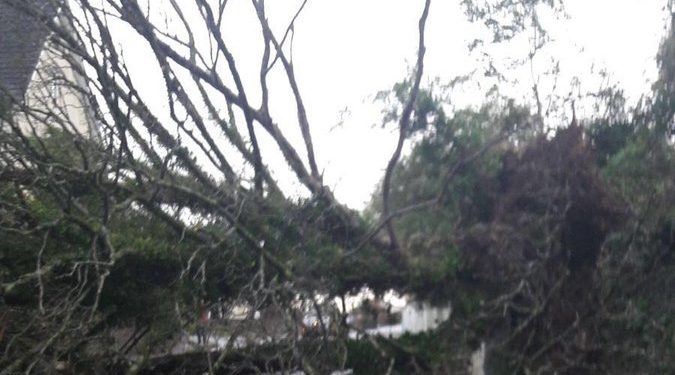 Hurricane Ophelia has made a blistering start on its journey across the country this morning (Monday, October 16), leaving several trees knocked down across the south, according to reports.

Due to the stormy conditions, Glanbia has indicated that there may be some disruptions to its milk collection and feed delivery services. All of its branches have been closed for safety reasons.

Similar action has also been taken by Dairygold; a significant amount of milk collections were made this morning before the storm hit, the processor explained. Collections have now ceased for a number of hours, with the possibility of some collections being carried over in to tomorrow.

For the safety of staff and customers, all of Dairygold’s retail stores will be closed for the remainder of today.

Meanwhile, the rest of the country is battening down the hatches, with several institutions and businesses closing for the day – including all schools and colleges. Teagasc has also announced that all of its branches will remain closed today.

The Irish Farmers’ Association (IFA) has released a statement from its president Joe Healy, who warned: “What we are facing is unprecedented, be vigilant, take any precaution necessary, don’t put yourself at risk and stay safe.”

Meanwhile, the Irish Cattle and Sheep Farmers’ Association (ICSA) has announced that its scheduled regional meeting in Kilkenny tonight has been cancelled and has warned people to stay safe.

The Irish Creamery Milk Suppliers Association (ICMSA) has also decided to cancel an annual general meeting in Co. Wicklow, as well as two other meetings in south Co. Galway and Mallow, Co. Cork.

Speaking to AgriLand, the ICMSA’s John Enright said: “We decided to cancel the meetings because there is no point putting anyone at risk. The meetings will be rescheduled over the next fortnight. We have sent messages out to our members and we will put updates on our Facebook page.”

Cork’s Red FM has announced that a tree has fallen on a car in Cork, with emergency services at the scene. There have been no reports of injuries as of yet. Winds of 168kph have been reported on the same station.

Red FM also reported that a number of roads have been blocked by fallen trees, as well as telephone poles down in other areas locally.

According to a tweet on the official Twitter page for An Garda Siochana, a tree has been felled by the heavy winds in Bandon.

Meanwhile, AA Roadwatch has issued a series of tweets, detailing damage done so far, and urging people not to travel on unnecessary journeys.

Some of the damage caused by #Ophelia in Ballylangley, Bandon. Please be careful on the roads https://t.co/j2o4cDXqQt pic.twitter.com/6rUZoPOZI1

Coillte released a statement noting that it has closed all of its forests across the country today, following the status red wind warning Met Eireann has issued for Hurricane Ophelia.

All Coillte recreation facilities will be closed today and no public access is permitted to any Coillte forests until further notice, the agency has said. Further updates will be provided as the situation evolves.

Coillte added that it would like to remind the public to be vigilant for fallen trees and to contact emergency services if any roads or access routes are blocked by fallen trees.