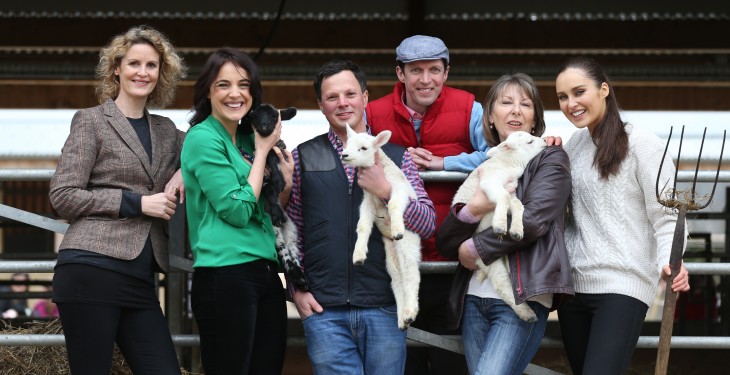 Early April, is one of the busiest times of the year for farmers, as the land welcomes new life once again.

From April 9, every evening at 7:00pm, Ella McSweeney, Aine Lawlor, and celebrity guest presenters, Deirdre O’Kane, Alison Spittle, Sean O’Brien and Lee Chin will descend on the O’Sullivan family’s dairy farm, amidst the chaos of spring-calving.

This year’s Big Week on the Farm studio will play host to a 150-strong live studio audience, in a field overlooking Dungarvan Bay, Co. Waterford where the cattle of Gillian and Neil O’Sullivan usually graze.

Gillian and Neil and their children Fionn (6), Hannah (4) and Tim (2), are the host farmers this year.

The family have been farming for generations and Gillian’s father and mother Marianne and Michael Wall are still heavily involved in the farm.

In unique and beautifully filmed footage, Big Week on the Farm will look at the secret lives of farm animals – including the chance to peer inside the world of the misunderstood crow – one of the cleverest species of the bird family.

Viewers will also follow the life of the calf from birth to separation from the mother; plus, see what happens when a rooster coop is invaded by a potential competitor.

Featured in this years series for the first time will be a look into the secret life of the vet.

The cameras will also follow a vet as he attempts to deliver a calf by cesarean section – can he preserve the life of both cow and calf?

Also, he will take viewers through a seemingly routine hernia removal – but, as with all procedures, potentially fatal danger is never too far away.

Big Week on the Farm

Meanwhile, location presenters Darragh McCullough and Helen Carroll will be broadcasting live from 10 different farms across the country – two different farms every night.

Other interesting insights will include: witnessing the makeover of a cow as it is prepared for a live sale at an evening mart; experiencing the difficulties of being the only producer based on an island; meeting the girls school which is rearing Aberdeen Angus cattle; plus, the chance to watch a world record attempt to gather the largest collection of Massey Ferguson tractors in one place to name a few.

Big Week on the Farm will also explore new technologies in farming, as researchers from around the world uncover how the farm of the future may be inhabited by a selection of robots and artificial intelligence.

The team will also uncover a farm which is underground in London and can deliver from farm-to-shop in a matter of minutes.

The dangers of soil depletion will also be explored.

Using ground-breaking and world-leading research here in Ireland, the show will analyse the effect of sensory stimulation and confusion in the production of the ultimate steak.

Following from the huge success of previous year’s sheep shearing Guinness World Record with Ivan Scott, and the world tractor reversing record – currently held by last year’s host farmer Patrick Shalvey -this year, the Big Week on the Farm team will be hoping to break even more records.

Meanwhile, celebrity guests will aim to beat actor, musician and comedian Pat Shortt’s hand-milking record in ‘Pull the Udder One’ – a feat he claimed during the milking challenge last year.

Each night on Big Week on the Farm, Ella, Aine and celebrity guests will present live studio demos, discussions, dissections, hatchings and births.

From calving, to lambing and laying, Big Week on the Farm – sponsored by IFAC the professional services firm to the farming, food and agribusiness sector – is set to provide the nation with real-time access to the incredible lives of Ireland’s farm animals and farmers. 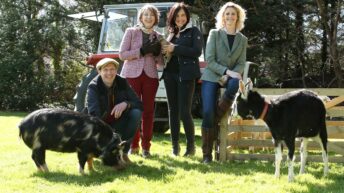 Big Week on The Farm on the hunt for trainee farmers