Capital investment in agriculture has grown considerably over the last number of years since its dramatic collapse back in 2009, according to Department of Agriculture figures.

Most of the decrease in 2009 was attributable to the expiry of Farm Waste Management Scheme, which required that all building work be completed by the end of 2008.

In its review and outlook document for the sector the Department detailed that total Investment (including breeding stock) in 2014 is valued at €867m, a €141m rise on 2013 figures and a 99% increase since 2010.

This means that the total investment level is slightly higher than 2006, before both the spike associated with the FWMS and the subsequent financial crisis.

Investment in agricultural machinery and equipment has been a major driver of growth and has increased by 149% over the last five years. Investment in farm buildings has grown steadily over the last three years and rose by 15.5% in 2014 to €222.6m. 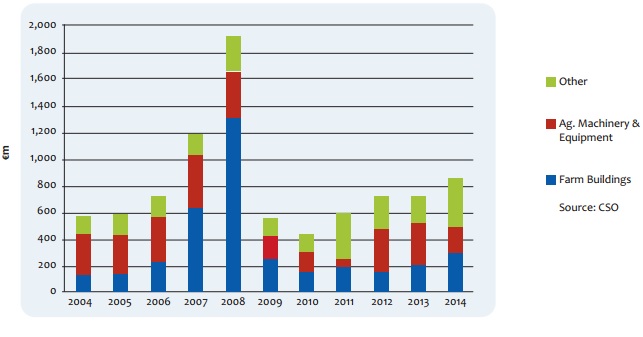 The increased investment on Irish farms is likely to continue over the next number of years due to the roll out of new farm investment schemes under the Rural Development Programme.

The Departments review and outlook document also details latest data from the Central Bank on borrowings in the sector.

It showed that the primary agriculture sector is the largest component of new lending, accounting for €600m or 23% of all new loans in the twelve months between September 2013 and 2014.

During the same period, new lending to Food and Beverage companies were €103m, or 4% of the total.