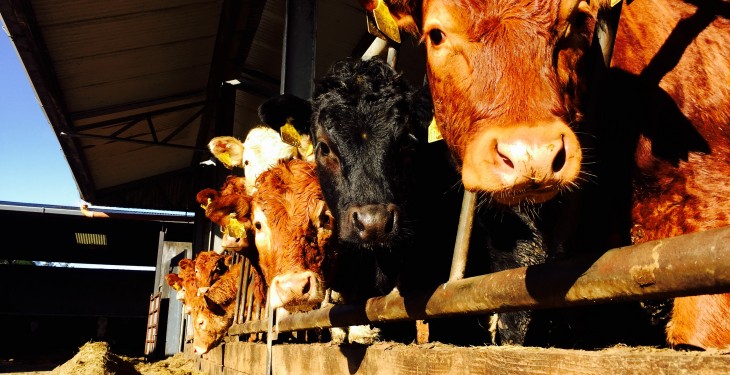 The North/south beef price differential for R3 grade heifer carcasses widened to 25.1c/kg for the week ending November 13, figures from the Livestock and Meat Commission showed.

Going by this difference in price, it equates to farmers in the Republic of Ireland receiving €70.28 less on a 280kg heifer carcass compared to farmers North of the border.

In the week ending November 13, farmers in the Republic were paid 368c/kg for an R3 grade heifer carcass, a fall of 6c/kg on the corresponding week in October.

This price decrease also means that heifer prices received south of the border were 6.5c/kg lower than the EU average, which stood at 374.5c/kg for the week ending November 13.

Compared to the week ending October 16, the EU average R3 heifer price rose by 1.5c/kg last week, when €1 was the equivalent of 88.2p.

The increased price gap between the North and the Republic can be put down to a significant increase in beef prices in Northern Ireland, where the R3 grade heifer price has risen by 18.5c/kg since last month.

At the end of the second week in October farmers north of the border received 374.7c/kg for an R3 heifer carcass, compared to 393.1c/kg in the week ending November 13, LMC figures show. 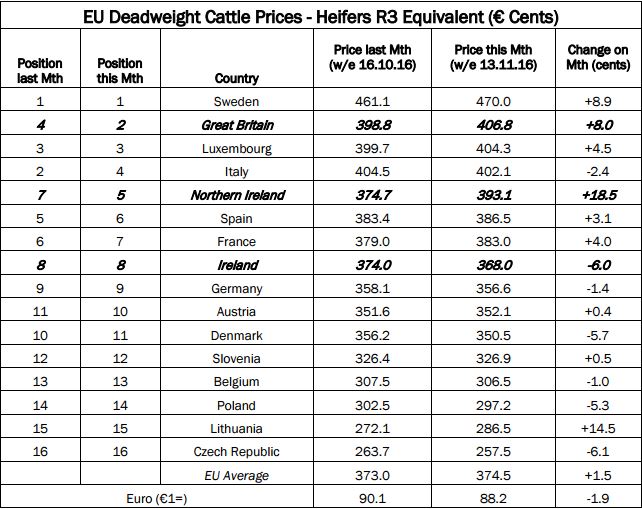 This meant that prices increased to 406.8c/kg for a R3 grade heifer carcass in Britain, widening the gap between the EU average from 25.8c/kg at the end of the second week in October to 32.3c/kg in the week ending November 13.

British prices for an R3 grade heifer carcass continue to tower above those received by farmers on the island of Ireland.

According to LMC figures, the price differential between the Republic of Ireland and Britain stood at 36.8c/kg in the week ending November 13, a difference of €108.64 on a 280kg heifer carcass.

Equally British farmers received a better price than their Northern Ireland counterparts, with a difference of 13.7c/kg or €38.36 on a 280kg R3 grade heifer carcass.

The Republic of Ireland remained in eighth place despite a price fall in the EU Deadweight Cattle Prices league table.

However, both Britain and Northern Ireland jumped two places due to price increases of 8c/kg and 18.5c/kg.

Britain is currently in second place, but are a significant distance behind Sweden who have a R3 heifer price of 470c/kg.

Jumping from seventh to fifth position, Northern Ireland over took both France and Spain in the league table, LMC figures show.