Preliminary forecasts show that beef output in the EU-15 region is expected to rise next year, but not to the same extent as 2016, according to Bord Bia’s Eoin Kelly.

Kelly, a Business Analyst with Bord Bia, pointed out that output growth is expected in France, Ireland and Spain next year, while some of this increase will be offset by anticipated reductions in the UK and Germany.

The most recent European Commission working beef forecast group suggests that beef output will be up for the 2016 calendar year.

According to Kelly, this is being fuelled by increases in Italy, France, UK, Ireland and to a lesser extent Germany and Spain.

This has largely been driven by increased supplies across Europe due to a recovery in the breeding herd, he said.

However, despite the increase in production, overall beef consumption levels within the EU-15 remained relatively steady last year and this trend is likely to continue in the short term with total consumption standing at around 6.75m tonnes. 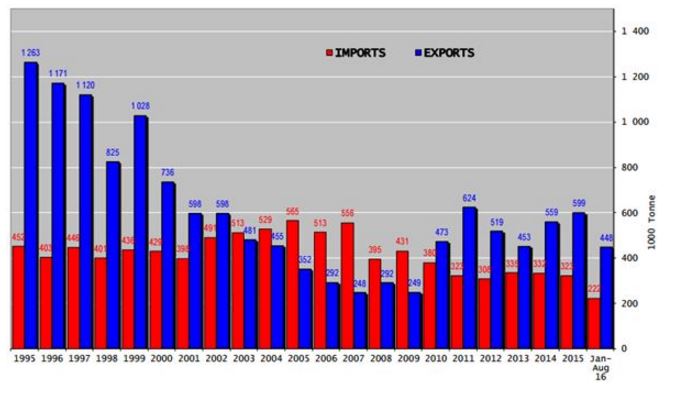 EU a next exporter of beef

The Bord Bia Analyst also pointed out that the European Union continues to be a net exporter of beef, with exports of beef and live cattle in 2015 up 7% on 2014 figures reaching just under 600,000t.

This trend looks set to continue in 2016, as during the first eight months of the year the EU exported 448,000t of beef and live cattle.

Kelly said that the main destinations are Turkey, which is predominantly for live bovines, followed by Hong Kong and Lebanon.

Growth has also been evident in African markets such as Libya, Ghana and the Ivory Coast, he said.

The majority of imports into the EU continue to come from South America, USA and Oceania, Kelly said.

For the first eight months of 2016, Brazilian beef made up over 40% of imports into the EU, he said, helped by a 7% year-on-year rise die to favourable exchange rates boosting their competitiveness.

Similarly, he said, there has been a rise in imports from Uruguay, up over 5% with steady imports from Argentina.

Despite supply issues there has been some redistribution of Australian imports to the EU, up 10% year on year but significantly below the import levels in 2013 and 2014, he said.