A dry and cold week ahead with widespread frost 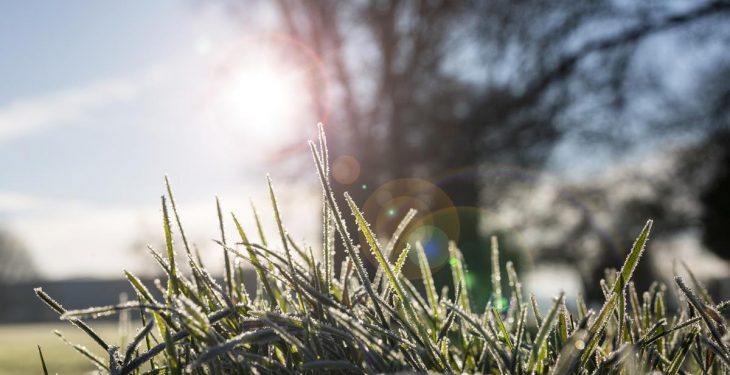 After an unsettled start to the week there will be a lot of dry, fine but cold weather across the country as the week unfolds with widespread frosts at night, according to Met Eireann.

With temperatures expected to be less than 10 degrees for most of the coming week, Met Eireann has said that drying conditions will be poor.

There will be plenty of opportunities in the next seven days for spraying although they are expected to be poor along southeastern and eastern coastal counties this evening into Tuesday otherwise good.

Today is forecast to become very blustery in eastern and southeastern coastal counties with strong to gale force and gusty north to northeast winds.

Rain looks set to develop soon in eastern and southeastern coastal areas as well and will turn heavy with sleet on higher ground later. Other parts of the country will stay mainly dry with hazy sunshine.

Met Eireann expects top temperatures to range between 4 to 7 degrees and it will feel bitterly cold in the wind.

Most of the country is forecast to remain dry on Monday night but rain may continue in the southeast for a time and also on parts of the west and north coast.

It will be a breezy night with strong northeast winds persisting in the southeast, reaching gale force along the southeast coast.

Lowest temperatures on Monday night will range between 1 to 5 degrees with frosts in sheltered areas.

The last of the rain will clear the southeast coast early on Tuesday and the rest of the day will be mainly dry with sunshine, according to Met Eireann.

However, there will be an ongoing risk of isolated showers on north and northwest facing coasts.

Highest temperatures will vary between 6 to 9 degrees and it is forecast to be breezy in fresh northerly winds, but winds will ease later.

Wednesday is forecast to be mainly dry with good sunshine, after overnight frosts and fog patches clear.

Some fog patches could linger in some areas and highest temperatures will range between 5 to 8 degrees.

Thursday is expected to be a cold day with a mix of temperatures and it will be coldest in Connacht and Ulster, but slightly less cold in Munster and Leinster.

All areas should stay dry as high pressure builds in, bringing light to moderate northeast winds.

Current indications for the rest of the week suggest cold temperatures will persist, but with light winds and mainly fair weather.