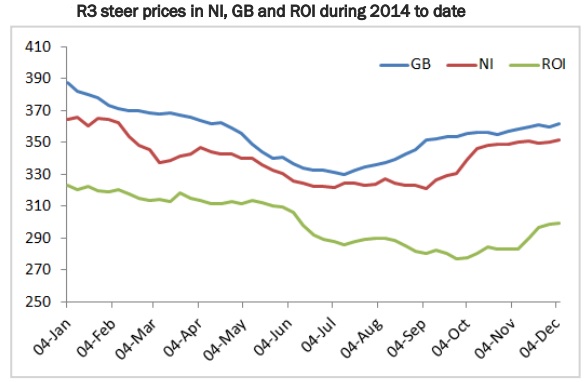 The LMC figures also suggest the gap has closed a significantly in recent weeks with prices in the South up by as much as €70 per head over the period.

It says while deadweight prime cattle prices in Northern Ireland and the Britain regions have recorded a steady improvement since early September 2014 deadweight prices in the Republic remained much more stagnant until early November 2014.

The LMC says however that in recent weeks however a tightening in the supplies of prime cattle being presented for slaughter in the Republic plants combined with a firm demand for prime cattle have helped to improve the deadweight trade with an equivalent R3 steer price last week of 299.6p/kg (380c/kg).

Bord Bia says the beef trade continued to remain steady last week on the back of strong demand.

It says supply has increased as a result of cattle coming indoors in better condition and finishing much quicker than anticipated. Bord Bia says trade remains good across our key export markets as purchasing ahead of the festive period continues.

Bord Bia report that the majority of steers were purchased last week at a base price of around €3.85 to €3.90/kg on the Quality Payment System with heifers being purchased on average at around €3.90 to €3.95/kg. These prices exclude the €0.12/kg bonus which is payable on in-spec QA animals. Prices paid for O grade cull cows are generally making between €3.10 to €3.30/kg.

Cattle supplies at export meat plants for the week ending December 6t stood at around 36,700 head, which was up 16% on the figure for the equivalent week in 2013. Cumulative supplies for the year to date are 10% or 145,000 head above the figures for the corresponding period last year, currently standing at 1.56 million head.