North Cork Co-op is not for sale, it tells Dairygold 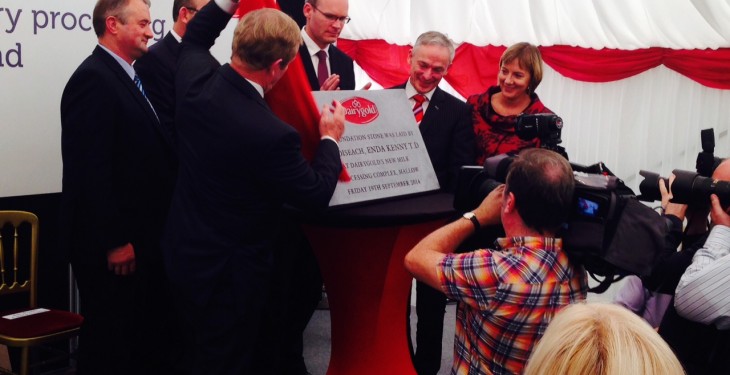 An Taoiseach Enda Kenny and Minster for Agriculture Simon Coveney at the recent Dairygold recent expansion.

The dairy rumour mill was into overdrive in recent days with ‘news’ that Dairygold was in the process of buying North Cork Co-op, but it seems it won’t be happening.

Dairygold has made no secret of its ambitions towards mergers and acquisitions in recent times and it seems that North Cork Co-op came onto its radar in recent months.

Agriland hears that exploratory discussions between the two neighbouring dairy co-operatives took place against the backdrop of long-standing co-operation and interaction between them including looking at the potential for a combination of the two societies.

Expansion and co-operation have been two key words of Dairygold’s in recent times, but it will have to look further than North Cork to achieve this.

While discussions were had between the two, it is believed that no official offer was made and North Cork Co-op assured Dairygold that it is not for sale.

North Cork Co-Operative has annual revenues of €65m and in recent years invested €5m in a new milk powder plant in Kanturk, which it said at the time will give the Co-op the facility to compete at a global level and support the local economy well into the future.

In the course of the past year Dairygold in looking at ways to improve dairy processing efficiency to maximise milk price to farmers in the region, held exploratory discussions with some neighbour co-op’s including North Cork Co-op.