The European Commission released its latest medium-term outlook for the Agriculture sector this week.

The report suggests that there may not be a significant recovery in farmgate milk prices until 2021.

The Commission says in 2016, dairy commodity prices are expected to recover ‘only slowly’ from the current lows, because world supply is expected to continue growing and stocks have accumulated.

It says the expected decrease in production in New Zealand, driven by unfavourable weather conditions and very low prices paid to farmers, might help prices to pick up faster.

However, given that it takes two to three months between changes in commodity prices feed into changes in the price for raw milk, the EU milk price is not expected to increase significantly in 2016. 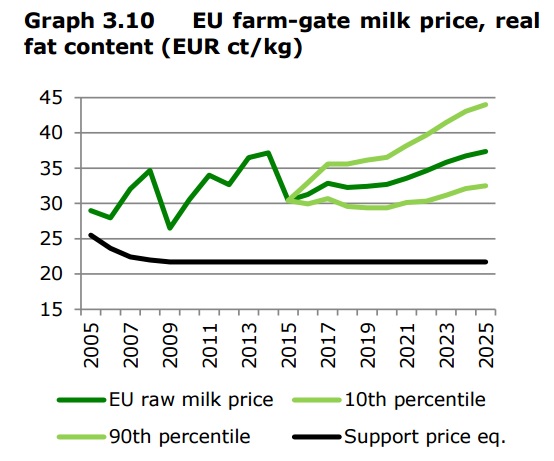 The Commission forecasts that until 2020, the average EU milk price is expected to oscillate between 32c/kg and 33c/kg.

It notes that this projection is lower than last year’s but energy and feed costs are also expected to be lower.

After 2021, the Commission says the milk price is expected to increase, along with dairy commodity prices, the oil price and feed costs.

The report also says EU milk deliveries are expected to grow by 0.9 % per year, i.e. close to 15 million tonnes over 10 years, of which less than 3 million tonnes will be in the new EU member states.

It says the steepest increases in deliveries are expected in Ireland, Poland, Denmark, Estonia and Latvia. In Germany, France, the UK and the Netherlands, deliveries should follow the EU average.

According to the report, these nine countries are projected to account for 74% of EU production in 2025, as compared with 72% in 2015. As a result, it says the concentration of milk production is expected to be rather limited.