No appeal procedure for farmers unhappy with carcass grade

Michael Creed, the Minister for Agriculture, Food and the Marine, has revealed that there is no appeal procedure in place for farmers who are unhappy with their carcass grade.

The minister was responding to a parliamentary question from Roscommon-Galway independent TD Michael Fitzmaurice, who asked the minister how a farmer would go about getting a carcass grade rechecked, if they were unhappy with the initial grade from a mechanical grading machine.

In response, the minister pointed out that EU regulations govern the monitoring of carcass classification, presentation and weighing.

This legislation does not provide for any appeal mechanism by the competent authority in relation to the classification of carcasses by mechanical graders.

“The role of my department is clearly defined in the legislation in terms of monitoring and supervision of classification, weights and carcass presentation,” added Minister Creed.

The minster’s response comes after a Dail debate yesterday, in which Fitzmaurice’s constituency colleague, independent TD and former Government minister Denis Naughten, said that the grading machines that are currently in use are “outdated and obsolete”.

He also pointed out that these machines were first launched 14 years ago – three years before the first iPhone was released.

In Ireland, there is no mechanism to permit an officer to find out exactly when a beef grading machine went out of tolerance.

Today, Naughten reiterated his points, claiming that beef farmers could be losing €140 or more per animal as a result of defective grading machines.

He argued that, after 21 mechanical grading machines that were found to be defective over the last two years and were taken out of commission by the department, there was no trace back of animals that had passed through those machines in the preceding hours or days.

He said that farmers whose animals had passed through the machines before they were found to be defective lost out financially, as a machine that was out by at least two subcategories could cost a farmer €140/head. 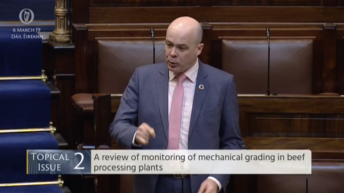