New Zealand milk production for May, June and July 2015 was at its highest point since 2012, figures from the Dairy Companies Association of New Zealand (DCANZ) show.

As New Zealand starts into its peak milk production period, currently so far this year the country has produced 8.65m tonnes of milk.

Looking at the figures for the past four years, milk production has steadily increased year-on-year and looks to increase again. 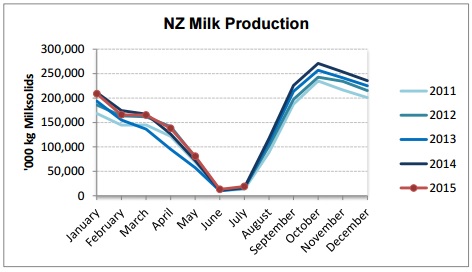 The cull cow kill has been exceptionally high with 1m head culled between June 2014 and July 2015 as farmers remove the underperforming animals from their herds.

Matthew Newman, senior economist with DairyNZ told AgriHQ that cull cow numbers have increased by 185,650. This is an increase of 21%.

New Zealand dairy farmers are culling for multiple reasons, he said, with the strong beef price has been cited as the main reason.