Recent converts to dairy farming, John Lanigan and Denis Condron, will share their experiences of switching from suckler farming to dairying at upcoming Lely open days on their respective farms.

Both farmers had focused on weanling production but found the system was not providing an adequate return.

The abolition of milk quotas gave John and Denis the opportunity to switch from suckling to milking cows and both farmers chose to install Lely Astronaut robotic milking systems. 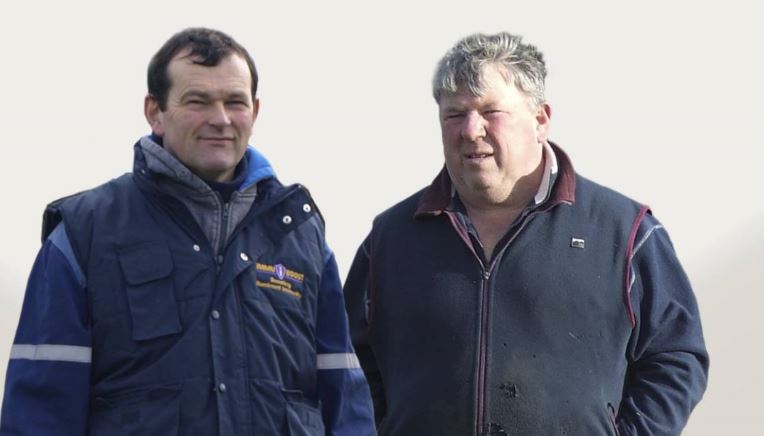 The Lanigan family has been farming in Leigh near Twomileborris in Co. Tipperary for over 300 years. John had been suckler and sheep farming all his life and began milking in October 2014.

“Before then I was excluded from dairying with the quota system and I thought now was my time,” John said.

“One of my key interests is genetics and I believe you can breed for everything.

“I decided to go for a 50/50 British Friesian Holstein cross cow, as I felt they were best suited to my system. Once you have the right set-up and the right cow it will be a dream,” he added.

Moving from beef to dairy

“We have gone from 100 suckler cows and 200 ewes to 70 dairy cows, 30 pedigree Red Angus sucklers and we still have the sheep.” said John.

“Times were tough in the beef industry, I was aiming for the top end of the market, selling all weanlings at nine months of age, and my production costs were too high.

“Margins were being continuously eroded and from an economical perspective it wasn’t adding up,” he said. 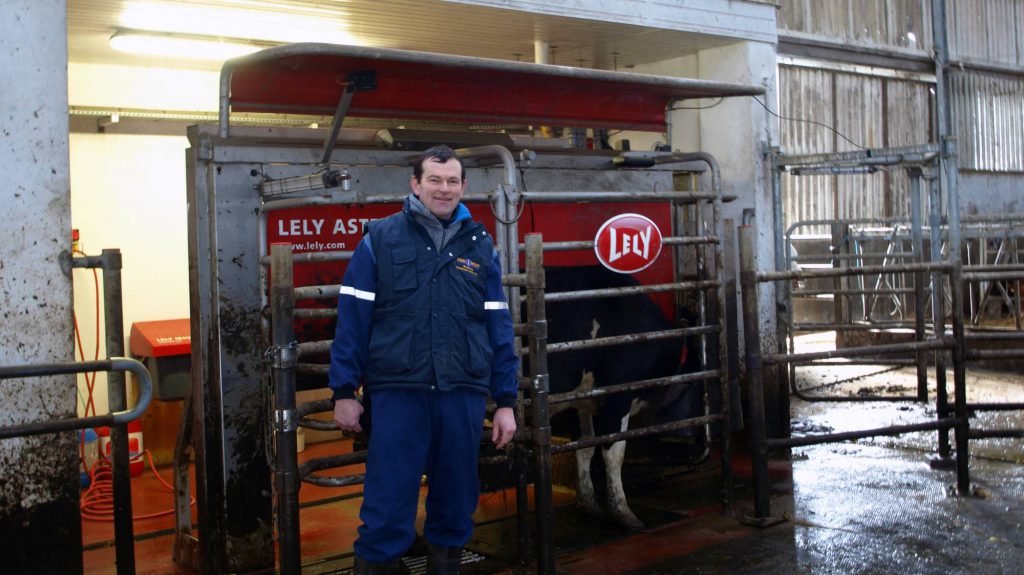 John Lanigan pictured on his farm in Co. Tipperary

“They are bred to be handled twice a day whereas the sucklers are rarely handled.

“Many dairy farmers had advised me that 75% of the work is in the first quarter of the year and that is certainly true.

“Dairying is constant, it’s a different type of job and you see progress all the time in the bulk tank.

“With beef it took 18 months from insemination to actual sale of the weanlings and then you were gambling and hoping for a good day in the ring in Thurles,” laughs John.

John added that he had plenty of existing accommodation so the key changes were going from straw bedding to cubicles, scraper installation and the move to robotic milking.

“They prepared all the plans for the barn layout, cubicles, scrapers etc. which was a big help to me coming from a suckler background with no dairy cow experience.”

“After over 25 years of suckler cows I did not fancy entering the pit before 6 every morning,” notes John.

I could never envisage my children becoming interested in dairying if I went the traditional route. I felt that if I had a good robotic milking system it would appeal to them.

“The flexibility of the system was also key as I am free to do as I please with the kids and not tied to a parlour.”

John added that the Lely T4C (time for cows) management programme is excellent and identifies any cows that are sick or in heat.

“I inseminated all my cows last year based on the robot information.

“Only four cows from 70 were in calf to the stock bull which shows how accurate the heat detection system is.

“When a cow in heat is detected she is automatically drafted into a separation area.

“It’s far easier when she is in the pen waiting for you rather than having to bring her in.

Breeding is a passion of mine and I’m delighted with the results.”

John explained that they started off with an AB grazing system.

“Since the end of February the cows are out for two thirds of the time so we are now effectively running an ABC system (indoors being C).

“This ensures more visits to the Lely Astronaut robotic milking system and the cows are milking three times daily and producing 31L on average at the moment.”

“There has been a lot of talk in this area about the famous casino,” laughs John.

When asked if he felt he had hit the jackpot with dairy he noted that he wasn’t there yet but feels it’s less of a gamble now.

The pleasing thing as a new entrant is that you can see things improving all the time and you see the progress year-on-year.

“There are definitely more efficiencies to achieve within the system as I become more experienced in dairy farming.

“My goal is to maximize the potential of the herd I have at the moment and once I’ve achieved that I will install another robot and double my herd size,” John concluded.

John Lanigan will host an open day on his farm on March 29 from 11am to 3pm. The farm will be signposted from Twomileborris and Urlingford.

“Better off dairying than suckling even at 23c per litre”

Denis Condron from Screggan, Co. Offaly will also host an open day on his farm on March 28.

Prior to converting to dairy, Denis has been a suckler beef farmer with 80 good quality cows split between spring and autumn calving.

“All weanlings were sold in the local marts and unfortunately, there wasn’t enough in it – the cow was costing too much to keep and it was only the abolition of quotas that gave me the incentive to consider milking cows,” he said. 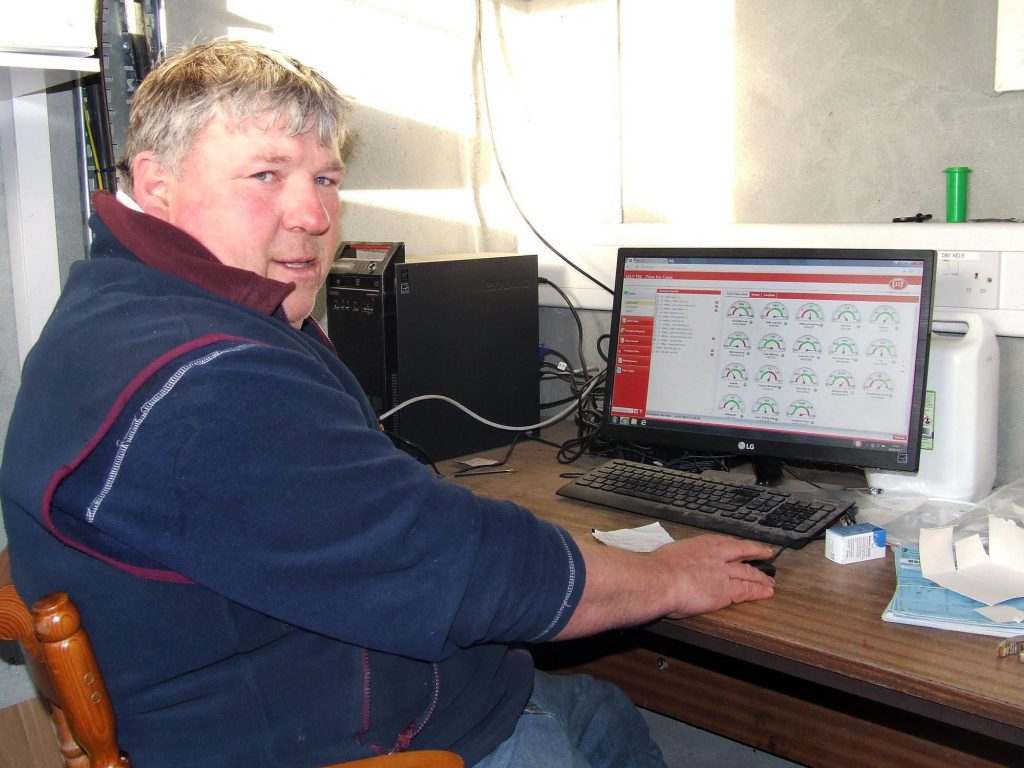 Moving from Beef to Dairy

“I looked at all the options and there was really little difference between conventional and the robot when you add the costs associated with the milking parlour, buildings and collecting yard.

“I opted for the Lely Astronaut which has been incorporated into the existing slatted house with minimal building and investment required.

“I was a bit nervous at times as it cost quite a bit to set up the farm (in terms of roads, paddocks, drinking troughs etc.).

“I started last year with 66 heifers and even when milk price was as low as 23c/L, I was definitely better off dairying than suckling,” Denis said.

“It didn’t cost me anymore to move to robotic milking but the fact that I have great cow information (milk protein/fat, yield, Somatic Cell Count, TBC, mastitis indication, heat detection, rumination etc.) and I don’t have to milk morning and evening made it an easy decision for me.

“I spend 15 minutes in the morning doing routine tasks – clean the laser, wash down the robot arm, change filter sock and check the attention list for any health alerts.

“This gives me plenty of time to do the other daily jobs,” he added.

“I recently formed a partnership with my son David (who works full-time off farm) and next spring we will introduce 30 more heifers into the herd with an additional 30 the following autumn.

“This will bring the herd to around 140 cows and it will be nicely set up for David when he decides to take it on full-time.” Denis concluded.

Denis Condron will host an open day on his farm on March 28 from 11am to 3pm. The farm will be signposted from Tullamore.