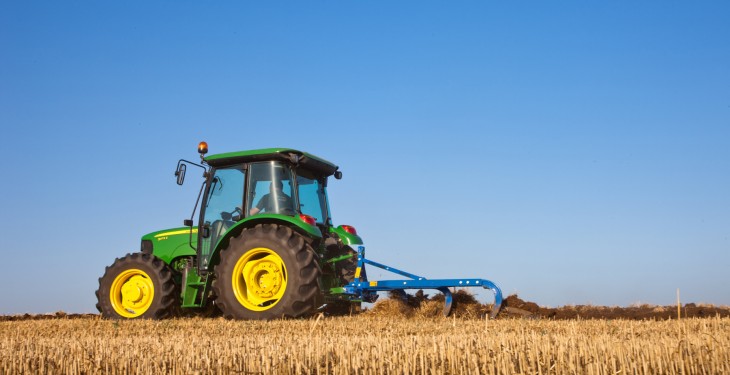 The 5055E, 5065E and 5075E models from 55 to 75hp (97/68 EC rating) can be ordered with two new cab options, equipped with either basic roof-mounted heater/ventilation outlets and controls or a higher specification air conditioning and heating system. The cabs also feature opening front, rear and side windows for extra visibility when required. An additional new feature is a digital instrument panel, as featured on the bigger 5M Series tractors from 70 to 100hp.

The synchronised nine forward/three reverse inline transmission follows an H pattern and can be shifted on the move via side-shift levers within the range. A standard 540rpm pto operates at a rated engine speed of 2400rpm, while the 540E economy version runs at 1700 engine rpm.

The tractors can be fitted with a choice of two mechanical self-levelling or non self-levelling loaders, with lift capacities of either 873 or 989kg to a maximum lift height of 3.38m. Rear lift capacity is 1.8 tonnes at the hitch balls.

John Deere 5E Series tractors are suitable for a range of customers including smaller livestock or mixed farms, speciality growers and part-time farmers or private landowners, as well as the commercial groundscare market.