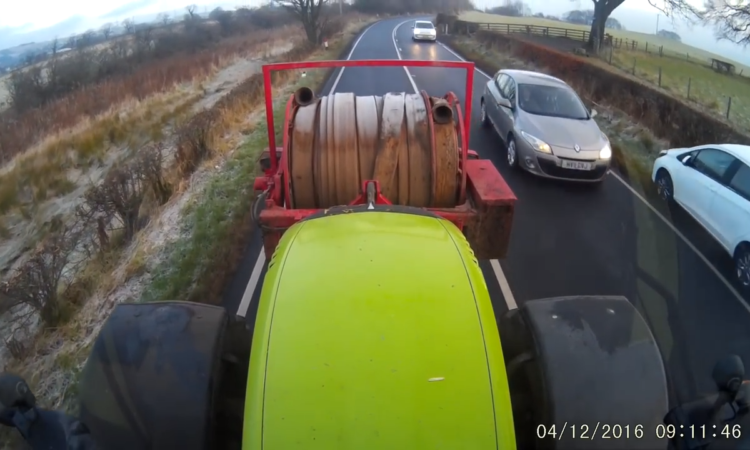 Machinery drivers have taken to social media asking motorists to take extra care around tractors in light of a dashcam compilation video which has been shared thousands of times online.

The 44-year-old had been sharing footage from the cam on his YouTube channel as a hobby for several years but decided to make a compilation video on Facebook to highlight some of the most extreme near-misses he had come across behind the wheel.

Viewers’ hearts were in their mouths at times during the clip which is just under three minutes long. (Click here to view the video).

At the time of publication, the footage had already been watched more than 1.2 million times since it was posted late on Sunday evening.

It shows lorries, motorbikes, vans and cars all overtaking precariously or pulling out in front of the Claas as Andrew goes about his work.

He said: “I bought the camera because we see this all the time – even going back 20 years you still got ‘loons’ overtaking on blind bends. Cameras are so cheap now and easy to use.

Most drivers are fine but you do get some crackers.

“It’s not unique to around here as you can see in the comments; anybody on the roads in tractors sees much the same.”

It seems the video has already done some good as there have been surprisingly few negative comments made, with many motorists coming out in support of tractor drivers.

It comes as Farm Safety Week gets into swing and highlights the danger caused by impatience on the road.

Being stuck behind slow-moving farm equipment for two miles is only equivalent to stopping at two red lights.

‘I just remember the wheel going over my midriff’