Northern buyers continue to be active at marts nationwide with live exports across the border up 44% since the start of the year when compared to 12 months ago.

In the last week in March alone, live cattle exports to Northern Ireland were up over 93% compared to the same week last year. Over the week some 1,560 cattle were exported across the border compared to 808 during the same week in 2014.

In total almost 15,000 head of cattle have been exported to Northern Ireland so far this year, compared to just over 10,000 for the same period in 2014.

This means that Irish cattle represent better value now than in 2014 and this has created more interest from Northern buyers for all categories of cattle but especially for weanlings and store cattle. 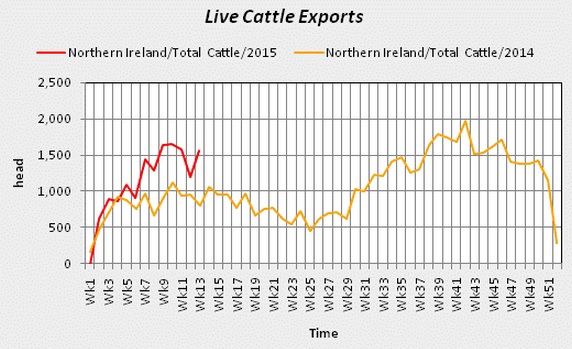 Despite the significant increases in exports to Northern Ireland the Bord Bia figures also show that live cattle exports in general are down 14% this year compared to 2014.