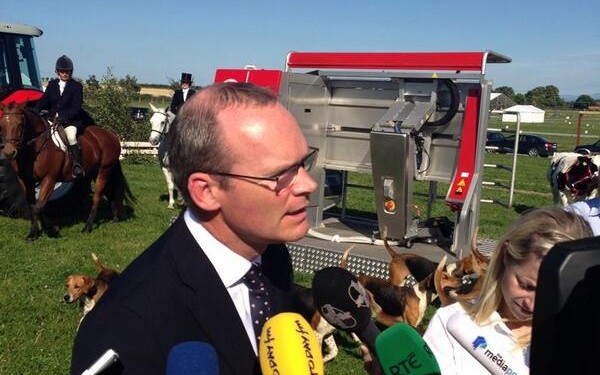 Agriculture Minister Simon Coveney TD has insisted overpayment fines issued to more than 4,800 farmers amounting to €1.4m must be paid, there are hopes of an advance single farm payment and no clear signs of a view on coupling on the suckler herd.

He was speaking to the press at the launch of the National Ploughing Championships 2013 in Laois this afternoon.

“This isn’t a choice that I have. If farmers got paid for land that wasn’t eligible for payments then we have to get that money back. Otherwise we get fined by the European Commission. This is public money; this is EU money. If it was drawn down on land that isn’t eligible for payments then we have to ask for it back, of course we do. That’s how the rules work.”

He said Ireland draws down in terms of direct payment more than €1.2bn  for its 130,000 farm families each year.

“It’s my job to ensure that that is done efficiently, that it’s done fairly, that people that are eligible get paid on the land that is eligible and if some of that land isn’t eligible then there are consequences to that.”

He set the department is set to continue to clawback payments.

“We need to claw back some of that money. But the average clawback is very much in the hundreds not in the thousands for farmers,” he noted.

In terms of timing, with speculation of possible additional cuts in the forthcoming Budget of farm payments, Minister Coveney said not to get confused.

“You are confusing a number of things,” he told the press gathering at the launch of the National Ploughing Championships 2013 in Laois.

“Firstly we have applied for an early advance payment on single farms payments (SFP) to improve cashflow for farmers in the autumn. I’m hopeful that we’ll get that and we’ll be able to pay out payments six weeks earlier than we otherwise would be able to make them. That will be a significant payment and then the final payment in terms of SFP will be happening as usual in December. So we hope to get that advance payment approved in the next number of weeks.”

However, he said under the Common Agricultural Policy (CAP) and under the new EU Budget there is going to be a slight reduction in SFP of about three per cent for everyone.

“But it’s up to me to ensure that we use the money we do have available to us in national money and in EU money, to make sure we get full value for that and we support the sectors in farming that need support and that we help farmers get more from the marketplace.

“Ultimately that is what this is about. We have had a difficult year. We also have a lot of positives in farming at the moment: milk prices are strong and staying strong, beef prices have been very strong and have remained strong, lamb prices have also been improving and we are opening up new markets all the time outside of Ireland. So this as an industry is strong an growing even though we have had difficult challenges this year that’s we had to overcome.”

When asked about a date for final decisions be made on the new CAP and will a coupling payment be an element, the Minister outlined the current position.

“Well first of all there will be national financing to draw down the funds necessary or the funds that are available, but we have a lot of strategic decisions to be made now. One of the targets that I had during the CAP negotiations was to get flexibility so that Ireland could design it’s own CAP system to suit our ambitions for agriculture, our Food Harvest 20:20 plans for growth and expansion and also to ensure we could support vulnerable sectors in Ireland that need supports to survive in farming.

He said designs are under way for a new CAP system with a public consultation process. “We are getting that feedback back now. So in the next couple of months we’ll finalise all those decisions on everything from young farmers to coupling to a redistribution of payments, to whether there’ll be a cap or whether there’ll be a floor. All of those things.

Asked if he was coming down in favour in terms of coupling on the suckler herd, the minister quipped: “You’ll have to wait and see I’m afraid.”

The full briefing can be watched on AgriLand TV