Miniature loader gets ‘beefed up’; bigger pump lurks within

These skid-steer machines are notable for how small they are; there isn’t even room for the operator to sit down. Instead, the driver has a standing perch at the rear – from where he or she can operate the rig.

The chassis on the latest models is unchanged from what went before; it’s the same story with the engines – they are also carried over unchanged.

Giant has, however, updated the hydraulic system. A new valve block provides a greater degree of “user-friendliness and precision”. These loaders now also come with a bigger (35L/min) hydraulic pump – for more oomph.

Optionally, a so-called ‘soft brake‘ can be specified. With this, the machine slows “gradually” after releasing the steering levers.

Moreover, the updated operator’s platform is suspended and is described as “easy to fold” – to make the machine even more compact for transport. 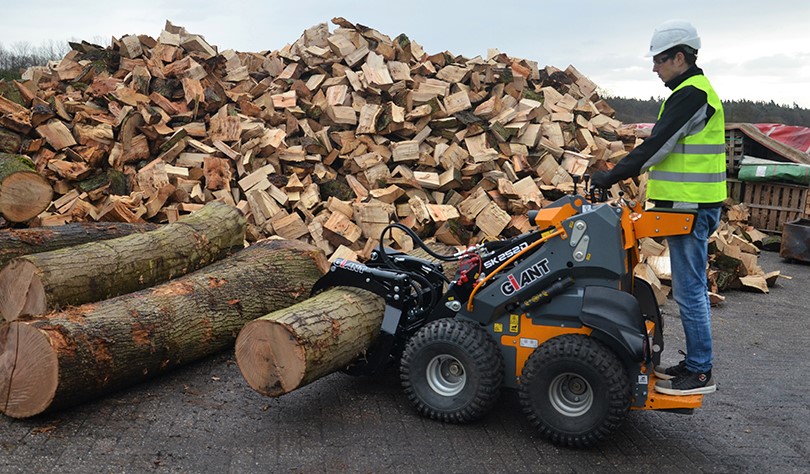 Hydraulically-driven attachments, such as mowers and brushes/sweepers, benefit from an optional double gear pump – for increased oil flow.

Depending on tyres, these machines are anywhere from 0.76 to 1m wide – so, regardless of how they’re shod, they’re narrow enough to access most tight spots.

These machines can be had with Honda (21hp petrol) or either of two Kubota (20/25hp diesel) engines, depending on model. They weigh 750-810kg – significantly less than 1t.

For working inside buildings and around animals, the two diesel variants can have an integrated diesel particulate filter – claimed to reduce emissions by more than 90%.

Below is a video showing an existing Giant (stand-on) skid-steer loader in action – last year.

Note the machine’s diminutive dimensions, enabling it to quickly scoot about and change direction relatively rapidly.

From the farm to the factory...making 3,000 loaders each year