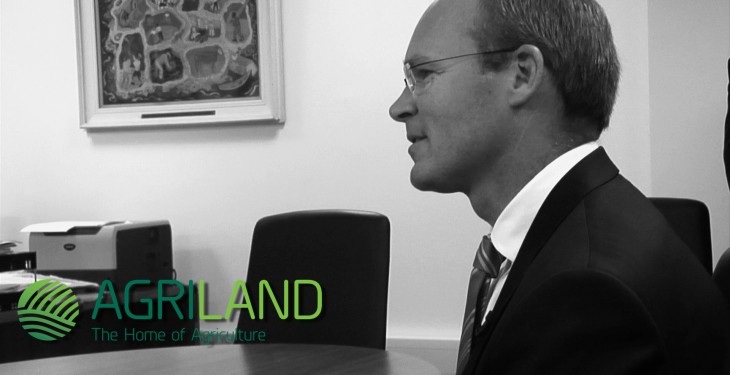 Long-term milk pricing contracts between dairy farmers and co-ops for Ireland is on the cards as preparation for post-Quota 2015 continues.

This is according to the Minister for Agriculture Simon Coveney TD, who is set to travel to Dubai, Saudi Arabia, Qatar and the United Arab Emirates next month to forge new dairy business for Ireland.

In an AgriLand broadcast, Minister Coveney stressed long-term pricing contracts between farmers and co-ops must be examined and this was key for a free market to combat price volatility.

“First of all, we do need to look at longer-term pricing contracts between farmers and their co-ops. A lot of farmers are nervous of that. In a good year they might not get paid what they otherwise would have if they agreed a price 12 months earlier. But of course the upside is that in a bad year if there was to be a price collapse they are protected from that.

“Certainly in the years 2015 and 2016 when we are coming out of a managed quota situation and into a free market approach towards dairy production, it makes a lot of sense for farmers to sign up to their co-ops for long-term pricing contracts for 40, 50 or 60 per cent of milk they are going to supply for them.”

The minister continued: “There is also an appetite within the co-ops to do that. We are looking at ways in which we can anticipate price volatility and try to insulate or ensure Irish farmers against that and there are ways which we can do that.”

Markets outside the EU will become key for dairy expansion, the minister explained. “If you look at the dairy markets we are exploring at the moment, in a few weeks time I am going to Dubai, Saudi Arabia, Qatar and the United Arab Emirates. All of those countries are interested in sourcing Irish dairy products.”

In terms of the Chinese market, the minister said: “My Chinese counterpart has said volume is not the problem. We can take as much milk powder as you can give us. The issue is around quality and price.”

He continued: “We do think we can find new markets outside the EU for new markets farmers will produce. Of course we have to prepare for that, put the contracts, relationships and partnerships in place with our big co-ops, our big dairy companies and partners predominately outside the EU. All of that is under way.”

Speaking on possible price volatility post-Quota, the minister said  he is “more excited than concerned”.

“Of course we have to plan for this. What is not going to happen is that we are going to reach a point where quotas end over night and Ireland or Europe is not prepared for that. We have been preparing for the past two years, farmers, farmer organisations, consultancy organisations, Teagasc, with the co-ops and with the industry generally to plan for how we are going to manage a significant growth in dairy volume that is going to happen after 2015.

“We are probably going to get a 15 per cent increase in dairy output perhaps in the first 12 months if we get good weather. Just to re-assure people we are managing the situation and we are planning for it.”

Talk of compulsory diary insurance for farmers across Europe and a push for milk supply controls by France is being discussed at a high-level European debate on dairy quotas post 2015 next Wednesday. Minister Coveney said safety nets are required but is adamant they should not include supply control mechanisms.

“The conference next week is about the number of countries who are not as confident about the expansion process as Ireland is,” he explained. “Countries such as France and in particular newer members states like Poland who might have an average dairy herd size of three or four animals, in a very different place to Ireland in terms of a dairy development.

“So we do need to have safety nets, market tools and introduce them at a European level should those prices collapse, but those tools should not include supply controls and we have made it very clear that is our case. ”