Lely live robotic milking cows are on the move 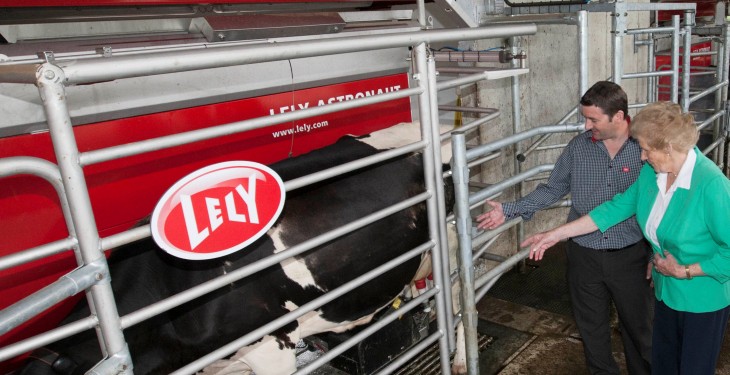 More than 40 top Northern Ireland Holstein Friesian cows are getting the Rolls-Royce treatment today. They are currently in transit from Swatragh, Co Derry and they are set to take the National Ploughing Championships by storm next week in the first ever live robotic milking demonstration at a trade exhibition in Ireland.

Organised by Lely, one of the world leaders in robotic milking systems and the National Ploughing Association, the project has been in planning for the past year and it is expected to be one of the highlights at this year’s ploughing.

In terms of logistics, the Lely Astronaut A4 machines are already set up and ready to roll, and the cows are scheduled to arrive in Laois this afternoon.

Lely’s Tomás Cooney explained: “We have 30 bales of straw to bed the cows. They are autumn calving cows so they have plenty of milk. They come from the farm of Barry O’Loughin, in Swatragh, Co Derry. They have been loaded into a special truck by David Clarke Livestock so they are getting the Rolls-Royce treatment. They should arrive down at the Ploughing in Laois today between 3pm and 4pm. Each cow will be milked one at a time at the Ploughing and more than 8,000 litres of milk will be produced.”

The milk produced will be stored on-site and Lely’s Cooney said a local co-op is going to buy the milk and donate the proceeds to charity.  “There are a lot of people involved in the logistics, the lorry driver, David Clarke Livestock, gardai, the Department of Agriculture. There’s a lot of paperwork involved, but they are in transit, the cows are on the way.”

Lely introduced their first robotic milking machine in 1992 and 21 years later it has more than 16,000 machines working worldwide, milking over a million cows every day. The National Ploughing Championships takes place next week.