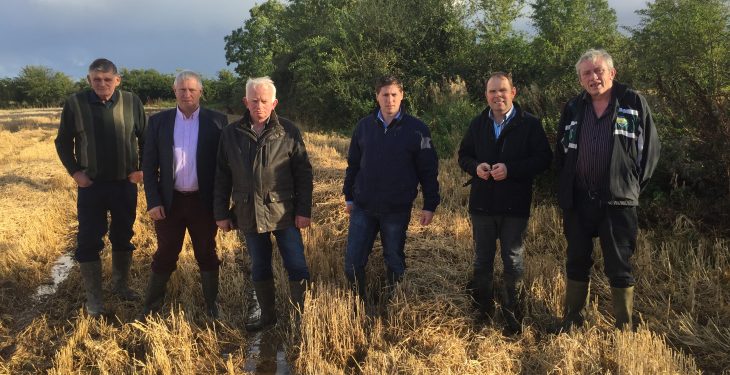 Sinn Fein MEP, Matt Carthy, has called for crisis aid from the Government and the EU for Irish tillage farmers who have been affected by crop losses due to the recent inclement weather.

The request by the Sinn Fein MEP comes as many tillage farmers are in the midst of a deepening income crisis, which he seen first hand following a weekend visit to farmers in Co. Longford.

“Tillage farmers in Western areas, North and South, have been particularly affected by this situation, with over a third of crops going unharvested.

“This comes on top of a fourth consecutive harvest of low grain prices.

“Mounting losses in this sector have caused the cereal area in Ireland to fall by close to 100,000ac since 2012.

This is unsurprising, with Teagasc reporting that farmers are being offered prices as low as €116 per tonne, well below the €152 per tonne needed, just to break even.

Carthy also said the Department of Agriculture must respond to these challenges and not sit by as tillage farmers struggle from one crisis to another.

“I have called on the Minister for Agriculture Michael Creed to recognise the investment that goes into these crops by farmers, who work from the assumption that at the end of a season, they will yield a return.

“I have also contacted Commissioner Phil Hogan asking him to act immediately in response to this crisis and to ensure that emergency aid be made available to Irish tillage farmers to prevent the imminent collapse of the sector.

“The economic cycle these farmers work from has been broken now not once, but twice, and if crisis aid is not made available quickly, we will soon witness the collapse of the sector completely,” he said.

“We have had the EU Exceptional Aid Package for the dairy and livestock sector and there is certainly full justification for similar aid to be provided for hard pressed grain producers along the western seaboard and other areas of the country which have suffered from exceptional rainfall”, she said.

Harkin said the number of farmers affected may be small in number, but their situation requires specific action which, in the short term, had to come from the Government.

This group of farmers cannot be left alone facing serious losses financially and significantly reduced ability to feed their stock over the winter.

“Teagasc is currently gathering information as to the number of farmers concerned and the financial cost to each farmer.

“It is hoped to have this information within the next week and this can then form the basis for determining what type of package might be developed to help them.

“When I have this information I will bring it to the European Commission and make the case for aid based on the fact that farmers in other EU countries including France, Germany and Belgium have experienced similar problems,” she said.

MEP Luke Flanagan also visited farmers affected by the tillage crisis over the weekend and he said action needs to be taken before next Thursday.

Speaking at an agriculture committee meeting yesterday, the Independent MEP said due to incessant rainfall over the summer many tillage farmers west of the Shannon are facing wipe out.

Flanagan also said that we need to look at the long term future of the tillage sector as this year’s crisis isn’t only going to become a one year problem, it will roll on.

“This is a massive problem. It isn’t just Ireland, its France and its Belgium.

“We are doing something to help the dairy sector and a variety of different sectors and we need to do something about this because people are quite literally suicidal.

“They can not get their machinery in, they are ploughing up the ground, it is sprouting, it is falling over and we are heading for disaster,” he said.

Flanagan also said a European response is also needed as there is going to be a massive knock on effect.