The lamb trade has steadied this week with most plants operating off a base price of 460c/kg for new season lamb.

Over the past month, prices had dropped following the passing of the Muslim festival of EID, but with some ease in supply last week due to the ploughing championships, factory-gate prices have stabilised.

However, despite the ease in supply last week, a number of procurement managers have suggested that supplies will increase as the week progresses.

Procurement managers are also cautious about the short-term outlook of the sheepmeat market, with demand said to be low in France and the UK following the ending of barbeque season and the beginning of the new school year.

Like the lamb trade, the cast ewe market is also unchanged from last week, with most plants working off a base price of 230-240c/kg to secure suitable cast ewes.

The number of sheep slaughtered in Department of Agriculture approved sheepmeat export plants declined by 17% during the week ending September 18 compared to the week before.

Official figures show that a fall in spring lamb slaughterings account for the majority of this decrease, with spring lamb supplies falling by almost 25% or 16,132 head compared to the week before. 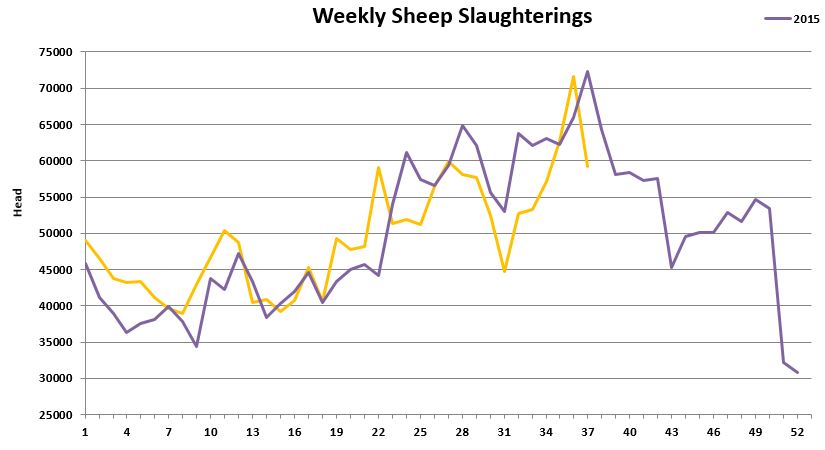 According to Bord Bia, slower demand is putting pressure on UK sheepmeat prices, with the SQQ live price for lamb in England and Wales making the equivalent of around 447c/kg last week.

Lower activity has also been reported in France on the back of slow demand which is expected to continue into this week.

While, Grade 1 lamb in the Rungis market was making the equivalent of around 541c/kg towards the end of last week.