This week, the European Parliament rejected the Commissions proposal to allow Member States to ban the use of EU-approved GMO feed and food.

“I very much welcome it as an acknowledgement that the EU livestock sector requires the importation of protein, mainly GM soya.

“Had this proposal been approved it could have led to Member States banning GM protein to the detriment of livestock farmers,” she said.

The Fine Gael MEP and Vice-President of the European Parliament said that such a ban would also have the potential to break up the single market and result in distortion of competition between Member States.

The Commission proposal arises from a deep frustration at the unwillingness of Member States to shoulder their responsibility in the approval process for GM feed, according to the MEP.

The proposal, which I voted against, has at least sparked a debate about GM technology, its place in society and in the food chain.

“Clearly, citizens embrace GM technology in the medical/pharmaceutical sector, but are reluctant when it comes to food and feed,” she said.

McGuinness added that the practical implications of the proposal were not thought through as it could lead to the reintroduction of border controls between Member States that might have imposed such a ban and those that would not.

“We believe that this issue should be dealt with at EU level. The Commission proposal conflicts with the principles of ‘better regulation’ and transparency and was not backed up with an impact assessment,” she said.

In Europe, only one GM crop is grown, mainly in Spain and Portugal. The authorisation of GM maize MON 810 is currently expired and is awaiting renewal.

Replacing GMO soya with non-GM would translate to an increase of costs for the EU livestock industry, which would be difficult to transfer to the consumer, according to McGuinness.

The Fine-Gael MEP stated that non-GM soya is not widely available and other major buyers of soya outside the EU have no hesitations about GM soya and are active on the market.

The EU imports 97% of its soybean needs, the EU market share in global soybean use is only 13%, thus significantly less relevant than that of other trading partners (China: 29%).

In recent years, the major soybean producers (USA, Brazil and Argentina) have increased soybean production, but non-GM soybean availability has decreased (only 9m tonnes would be fit for purpose in the EU), McGuinness has said.

So far, 58 GMOs have been authorised for consumption in food and feed in the EU.

They include maize, cotton, soybean, oilseed rape and sugar beet and another 58 are waiting for approval. Already, a proposal to allow Member States ban the growing of GM crops has been approved. 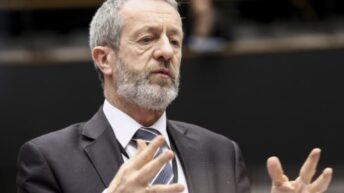