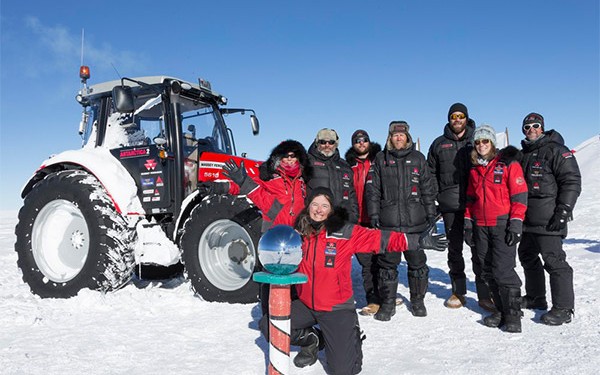 The team returned to France after a 28-day Antarctic trek

After a gruelling 2500 km ice-journey, the Antarctica2 expedition team arrived with its Massey Ferguson 5610 tractor at the South Pole this week.

After 17 days and 2,500km the team reported it was at a red and white striped pole with a reflective ball on top, surrounded by flags.

“This is South 90 – as far South as anybody can go. It’s unbelievable – at the South Pole there is a red Massey Ferguson tractor. We’re all ecstatic to be here and so proud to be taking our hero shots with the tractor that never gave us cause to doubt that it would be up for the challenge.”

The adventurous 2014 Antarctica2 mission aimed to drive a Massey Ferguson MF 5610 agricultural tractor on a 5,000km round trip from the coast of Antarctica to the South Pole.

The quest echoes the achievement of explorer Sir Edmund Hillary who led the first mechanised expedition to the South Pole in 1958 using Ferguson TE20 tractors.

In taking Antarctica2’s Expedition Lead Driver, Manon Ossevoort safely to her destination, the MF 5610 has helped her fulfil a lifelong dream to drive a tractor to the ‘end of the world’.

Celebrating this amazing feat with her fellow team members on arrival at the South Pole, Manon hugged the tractor and said I’ve it’s such a beautiful feeling and I’m so grateful to Massey Ferguson to have made this possible. It’s such a huge dream come true.”

The 38-year-old actress and theatre-maker has already driven a tractor 38,000 km from her home in the Netherlands across Europe and Africa.

The final leg of her journey was brought within reach when Massey Ferguson accepted to sponsor her to achieve her goal with an MF 5610.

With the Antarctic’s constant daylight at this time of year, the team created their own 30-hour days, driving the MF 5610 hard for 23 hours or more at a stretch, pausing only briefly for routine maintenance and driver changeover before pushing on. The tractor engine has been running virtually non-stop since the expedition departed on 22 November.

Not surprisingly, both the tractor and team were left battered and bruised by the hostile environment and ferocious surface conditions.

Along the way, they tackled treacherous crevasse fields, steep climbs, punishing sastrugi (solid ice-waves as much as a metre high) and deep, soft snow. Crossing the Gabienz Mountains at 3400m altitude, temperatures plummeted to minus 56 degrees C with wind chill.

Richard Markwell Vice-President and Managing Director, Massey Ferguson, Europe/Africa/Middle East said we were gripped by Antarctica2’s adventure across the ice and over some of the roughest terrain on the planet.

“It’s an immensely proud moment for Massey Ferguson and everyone associated with our farm machinery. As a great example of Massey Ferguson’s straightforward dependability, our tractor had a job to do and delivered on all fronts. Manon’s challenge to us to accompany her on her expedition was one which we were willing to accept and always confident to win.

“As such, Antarctica2 is a reminder to a global audience of the challenges facing a new generation of farmers and of the rugged, reliable equipment they need to meet the world’s growing demand for food.”

After a day’s rest at the South Pole, the Antarctica2 team will pack up, turn round and embark on the same route back to Novo Runway on the Antarctic coast. They will follow in the exact tracks of their outbound trip which, now having iced over, should speed up their return journey. With luck, they could be back before Christmas.