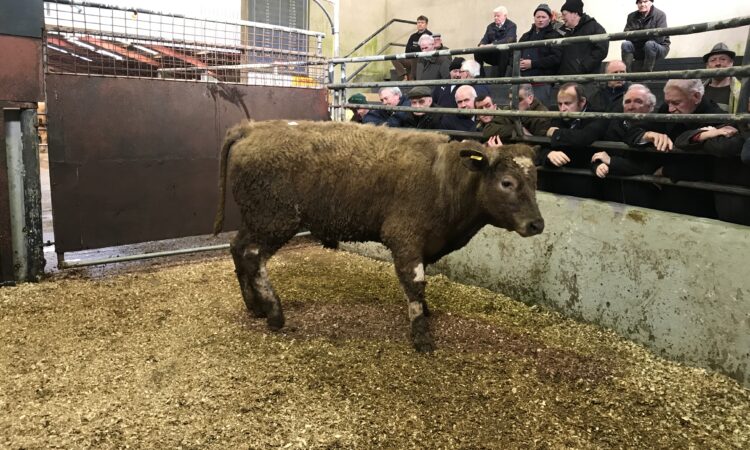 A more positive atmosphere is surrounding the mart trade in recent weeks, with a good demand from farmers sourcing cattle for pasture due to the large availability of grass and favourable conditions in some parts.

Weanling prices have continued in the right direction and this has been welcomed by farmers. While lots suitable for further feeding are popular, so too are the lighter weanlings.

Mart managers have described the cull cow trade as steady, with top-quality lots coming in just shy of the €2.00/kg mark.

However – on the other hand – the trade for plainer, lesser-quality cattle remains sluggish.

According to the mart’s manager, Eric Driver, the trade was positive in Tullow Mart on Friday last, February 8. He also noted that there was plenty of demand around the ring for forward store-type animals.

Friesian cull cows sold in the region of €1.00-250 over, while continental cows were reported to be a slightly easier trade. Feeder cows sold for €150 over to a top of €500 along with the weight.

Looking at the bullock trade, forward store Hereford and Angus lots sold for €190 along with the weight; €2.10-2.15/kg was paid for some of the younger continental bullocks. Friesian bullocks were reported to sell in the region of €1.75/kg.

Hereford and Angus forward and beef heifers sold for €1.85-1.90/kg and up to €2.20/kg for good continental lots. Plainer Angus and Hereford store heifers sold in the region of €1.75/kg.

A sale – consisting of 550 animals – was witnessed in Kilkenny Mart, Cillin Hill on Thursday last, according to the mart’s auctioneer, George Candler.

“The reason for the increase is hard to fathom, but perhaps some farmers now feel they have sufficient feed to see them through this winter. There is also the suggestion that when grass becomes plentiful, prices may increase significantly.”

Some 1,426 cattle and 200 calves went under the hammer in Carnew Mart, Co. Wicklow, on Saturday last (February 9).

David Quinn, the mart manager, said the trade remained strong with plenty of farmer customers. There was a strong demand for beef and forward store cattle with local and northern agents very active.

In addition, weanling bulls were reported to sell in the region of €450-780 along with the weight.