Man charged with explosive offences due to chemicals on UK farm

A man has been charged with offences relating to explosives and poisons by police following the discovery of chemicals on a farm in Wales.

The 57-year-old who was arrested at an address in Trimsaran, Carmarthenshire, on Tuesday, June 11, was charged by police yesterday, Tuesday, June 18.

There was no risk to neighbouring properties or to the general public, police confirmed.

While a search of the property has concluded, a police cordon remains in place.

According to the BBC, Wadge was remanded in custody; magistrates in Haverfordwest remanded him to appear before Swansea Crown Court next month.

A number of pigs died when a lorry carrying 190 animals overturned in the UK late last night, according to local police.

The M32 outbound in Somerset, England, has been closed overnight after a livestock transporter overturned, according to Avon and Somerset Police.

Officers were called to the scene at the junction with the M4 just after 12:10am this morning, Wednesday, June 19.

The lorry driver was injured and 190 pigs were trapped in the vehicle, the police force outlined.

A vet came to the scene as soon as possible. They were consulted to ensure the animals’ welfare at all times, according to the police statement.

The lorry driver was freed from the cab and taken to hospital at about 1:00am with injuries which are not believed life-threatening or life-changing. 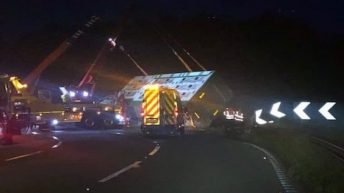