Majority of farmers believe IFA President should be paid less than €100,000

Some 83% of respondents to an Agriland poll on the pay of the IFA President have said that they should receive less than €100,000.

Some 32% of respondents said that the President of the farming organisation should receive between €70,000 and €100,000. 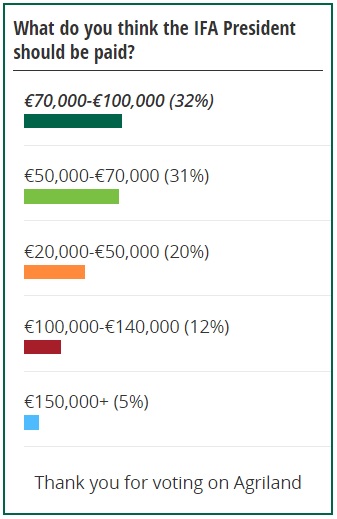 Earlier this week, Con Lucey’s report on corporate governance in the IFA revealed the remuneration of IFA Presidents since 2009.

Of note from the figures revealed in the report is that each President was the recipient of a termination payment equivalent to one year’s remuneration on leaving office.

In the case of former President Padraig Walshe, the payment was in excess of €180,000.

Pat Smith resigned when his remuneration package was revealed to be €542,000 in 2013, while Eddie Downey resigned on the back of negotiating a €2m exit package with Smith, which the IFA is now disputing.

You can read the full report here.

Analysis: Con Lucey report to influence the future of the IFA