Among the detail contained in Con Lucey’s report into the corporate governance of Irish Farmers Association was details surrounding expenses paid to officers of the association.

The report outlined that the expenses and allowances (see below) are paid solely for relevant IFA business, deemed as meetings and activities that are pertinent to achieving IFA policy and advancing the Association.

County Chairmen may claim only for relevant IFA business within their county, except where they are invited in writing or by a Regional Chairman to meetings/events outside the county.

National Committee Chairmen may claim only for relevant IFA business and activities appropriate to their area of responsibility.

Project Team Chairmen may claim expenses on a similar basis to National Committee Chairmen, solely for meetings and activities directly within the Project Team’s area of responsibility. 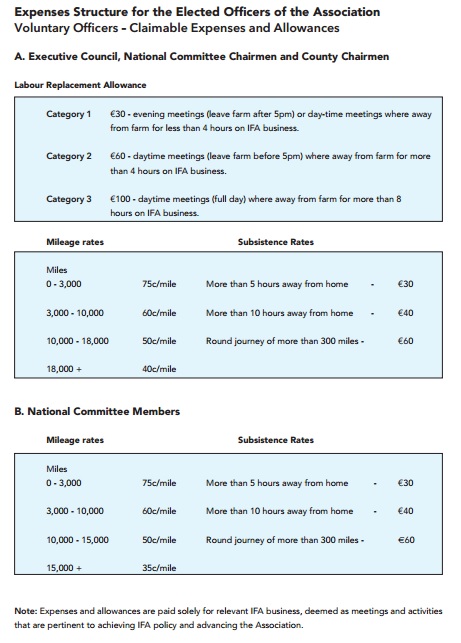 Lucey’s report also brought to light further revelations came to light following the release of a report by Con Lucey into the governance of the organisation with former president Padraig Walshe receiving €175,000 in 2009, including the use of the car, while in 2013 John Bryan received €169,400 in total including IFA Telecom fees.