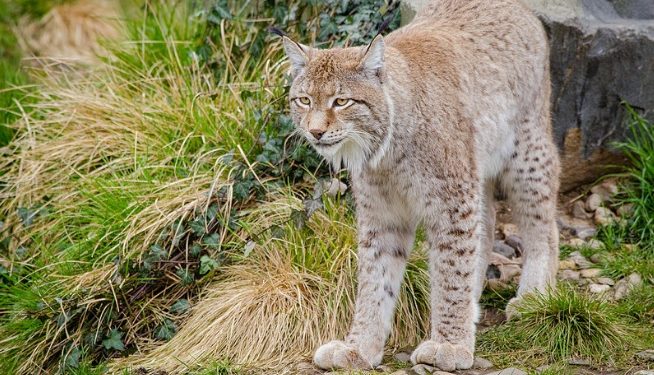 A local and national consultation is underway in the UK over plans to re-introduce wild lynx in parts of northern England and southern Scotland for a trial period of five years.

However, sheep farmers are against the idea of re-introducing the animal as they think it likely that wild lynx will prey on their sheep.

The Lynx UK Trust has said that it intends to apply for a licence in 2016 to trial the reintroduction of lynx, which is understood to be extinct from Britain for 1,300 years, to the wild for a period of five years.

It said that recognising that this is a significant step for both conservation and ecological science in the UK, it is currently carrying out a detailed and pro-active stakeholder consultation.

Last weekend, it was announced that the proposal for a five year trial reintroduction of lynx to the UK was moving to a local area in which lynx might be released in the future.

This area is the Kielder forest (England) and Borders (Scotland) area.

The purpose of this move is to allow consultations to take place with local stakeholders, who the Trust has said will be key in any trial reintroduction project.

Alongside this local consultation work, there will also be a period of further research into the ecology and socio-economic condition of the area, conducted by the Lynx UK Trust, its partner organisations and its advisers.

The Lynx UK Trust will have representatives available in the Kielder area on Thursday August 11, 2016 in order to hold an informal Q&A type event at a local venue.

Following the announcement by Lynx UK Trust that it has identified Kielder Forest as a suitable location for releasing lynx into the British countryside, the National Sheep Association (NSA) is stressing the need for the correct steps to be taken and any licence application to be fully and independently consulted on.

Phil Stocker, NSA Chief Executive, said that the NSA is are dismayed that Lynx UK Trust is still pursuing plans to release lynx, as it do not share their belief that the UK has any suitable locations.

“We are too small an island and too densely populated. As Kielder Forest spans the border between England and Scotland, any licence application to release lynx there would have to be approved by both Natural England and Scottish Natural Heritage.

“It would not be appropriate for any trial to go ahead without the express approval of both bodies, which could only happen after a full and independent consultation period that goes over and above what Lynx UK claims to be doing to engage with stakeholders.

“Such consultation would reveal a wide range of very genuine concerns about introducing the lynx. These are not limited to sheep, but also the fragile balance of economics, environment and rural society, plus the welfare of the lynx themselves,” he said.