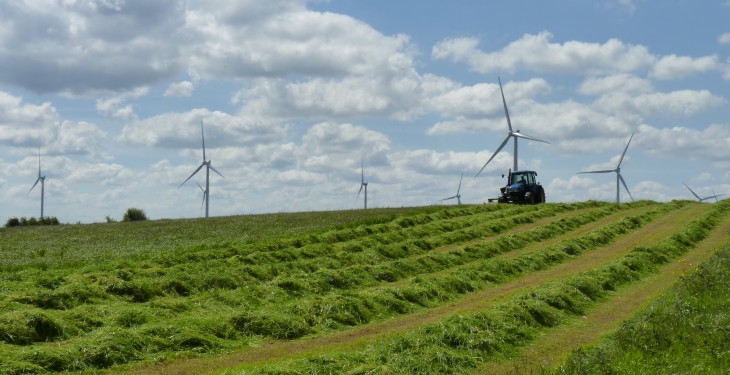 There is no scientific evidence from credible sources of wind energy having any negative impact on livestock.

“Over twenty years of experience here in Ireland and decades of experience across Europe and globally shows that livestock are perfectly happy and safe around wind turbines,” Dawson told Agriland.ie.

“Wind energy by its nature is generally rural-based and so the vast majority of projects are sited alongside and within farmland, where farming can continue right up to around the base of the turbine.

“Farmers who have wind turbines on their land often comment that the animals love using them for shelter.”

He said that animal welfare is rightly a key concern for farmers but as recent research from Harvard University has shown, wind energy is contributing to cleaner air and the health of people and animals, by cutting harmful emissions.

“We are clear from experience today, all across Ireland, that livestock graze and raise their young around wind energy without any issue.”

A recent nationwide survey by Ipsos MRBI carried out in February 2016 showed that 70% of people are directly in favour of wind energy in Ireland, with only 10% opposed. Support for wind energy was consistent across the country in both rural and urban areas.

“Our experience from talking to people is clear that wind energy and rural development work hand in glove and share a clearly positive relationship,” Dawson said.

He also clarified that while the IWEA and the IFA often share attendance at larger meetings, the two lobby groups haven’t had any recent specific bilateral meetings about wind energy.

“That said, we do contribute to farming publications when possible.

“We’re always happy to meet with farming organisations, including the IFA, and would certainly hope to work with the new IFA President when in office.”

Dawson added that where concerns over wind farms are raised with IWEA members, they are proactively dealt with to seek resolution, often through face-to-face visits and discussion, or else mitigation.

“Wind energy is a part of the community in which we operate and it’s in everyone’s interest to deal with issues as they arise and find the necessary solutions.

“We would encourage anyone who has a concern to visit a wind farm to see for themselves wind energy in operation and to raise any specific questions directly with the wind farm operator.”

Dawson concluded that as with all developments, landowners have clear access to planning authorities  to voice any concerns over wind farms.