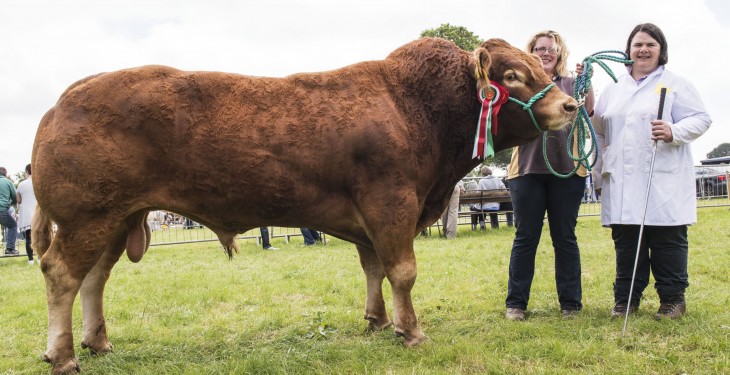 Antrim Show is unique in hosting a significant number of the most important Inter-Breed cattle and sheep competition finals, the heats for which have been held at venues, province-wide, since the end of May

However, the history books will confirm that Banbridge Limousin breeder Jim Quail stole the show  – literally – at Antrim last Saturday courtesy of his elite bull Lynderg Hero winning both the Breed Championship and the Supreme Beef  Inter-Breed accolade. And the victory was made all the sweeter, given the tremendous turnout of stock for the event.

“Antrim is our flagship show of the year as it plays host to the Northern Ireland Limousin Championships,” Jim told Agriland.

“Breeders were out in large numbers for this year’s event and the standard of competition was exceptionally high. Hero is home bred. Before coming to Antrim he had already won the Male Championship at this year’s Balmoral and Highland Shows. Our aim is to keep him as a stock bull. At just 30 months of age, he is only now coming into his prime.”

But it’s not just local cattle breeders, who are enjoying success both at home and in Scotland this year. Last Friday Texel sheep enthusiast
Alistair Gault, from Newtownabbey in Co Antrim, secured 6,060 guineas for a ram lamb at Lanark Sale while the following day going on to secure the Sheep Inter Breed Champion title at Antrim with an exceptional young ewe.

“She is home bred and had her first lamb this year,” he explained.

“Her maternal half brother made 68,000 guineas in the sale ring. So the quality is there. Initially, I had thought of flushing her but the plan
now is to let the ewe run with the rest of the flock this autumn, get her back in lamb and see what next year brings.

“We have had a tremendous year in the show ring with Balmoral and now Antrim Show being key highlights.”

The Inter Breed Dairy Championship at Antrim was won by the Fleming Family from Seaforde in Co Down with their eye catching Jersey second calver Potterswalls Glams Elisha. The cow had already racked up a series of eye catching successes at Balmoral and a host of other shows earlier this year. Her victory at Antrim is a further reflection of the great strides made by Jersey breeders here in Northern Ireland, and beyond, to make their stock more attractive to dairy farmers, industry wide, who are striving to produce milk as efficiently as possible.