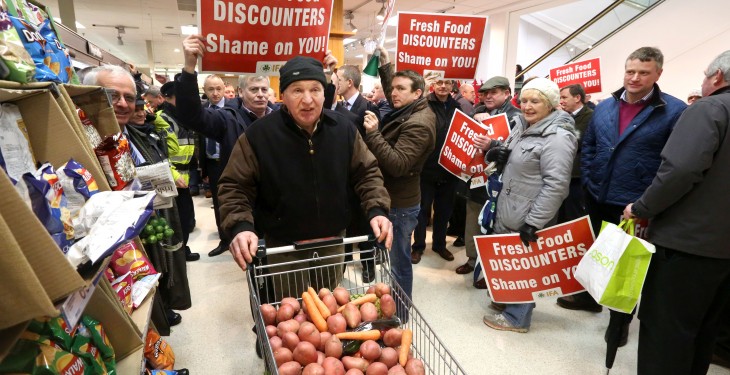 The run-up to Christmas is normally the time when Irish supermarkets go for broke and slash fresh produce prices. Invariably, both vegetables and potatoes get a bit of a rattle. So let’s wait and see what happens over the coming days.

Retailers do not regard offering produce in this way as ‘below cost of production’ selling. But I do and so should the European Commission, if this transpires to be the way-of-things as the Christmas 2017 market gathers strength.

I am not sure how the vegetable sector is coping at the present time. But potato growers could do with a break over the coming weeks and months.

In parts of the country, significant acreages of spuds are yet to be harvested.

Packers are also confirming that crop quality is very marginal this year. High levels of soil contamination and tuber bruising were significant challenges confronting growers as they battled to get their spuds out of the ground over recent weeks.

Adding to their worries is the impact of the snow and frost on those crops that have yet to be lifted.

Under such circumstances, one would expect the retailers to pay a realistic price for fresh potatoes. So it will be very interesting to see how market conditions develop as Christmas and the New Year draw near.

If there is any form of wobble in Irish potato prices, then it would be incumbent on the EU Commission to investigate what is at the actual heart of the matter. Agriculture Commissioner Phil Hogan has long waxed lyrical about the need for there to be greater transparency with the farming and food chain.

I recognise the potential for good that will come from next year’s implementation of the new Common Agricultural Policy (CAP) Omnibus Regulations. But it’s overdue for ‘Big Phil’ to have a real ‘set-to’ with the multiples. And where better to start this argument than on his home patch back in Ireland.

The commissioner has stressed repeatedly the need for farmers to receive fair prices. Here in Ireland, it is vegetable and potato growers who are in the direct firing line of supermarkets’ buying and selling decisions.

Moreover, the route to market for Irish potatoes and vegetables is a relatively short one. So it shouldn’t take the auditors from Brussels that long to work out what the retailers are up to, should the need arise.

These very same bureaucrats are ‘ultra-efficient’ when it comes to sorting out cross compliance levels within the various EU member states. So, surely it’s time for these ‘zealots’ to be let loose on our supermarket friends.