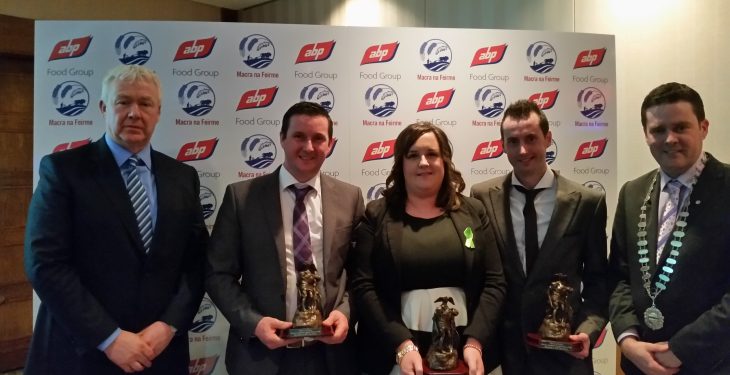 The National Leadership Awards recognise the leadership skills of Macra members within their clubs and the wider community.

The competition raises the level and standard of leadership in Macra and provides an incentive for the development of club programmes.

James Barber, a 33-year-old dairy farmer from Rathdowney Co Laois, has been a member of Rathdowney Macra na Feirme since 2005 and has held the positions of public relations officer, secretary and chair within the club.

He was awarded the Stephen Cullinan scholarship in 2009, which included a nine-month work placement on a 690-cow dairy farm in Canterbury, New Zealand.

He is the current national council representative for Laois Macra and has established two young farmer knowledge transfer groups – one for dairy and one for beef.

He was also involved in setting up Clough Macra and has worked with the development chair to increase the membership of the county to over 300 members today.

Outside of Macra, he is involved in the Project Hope Appeal and is chair of Rathdowney IFA and secretary of South Laois ICMSA.

He is currently the national agricultural affairs chair, where he has been working with vice chair Thomas Duffy and the committee on increasing the activity of young farmer development groups around the country and developing agricultural policy for young farmers.

Patrick McCarthy is a dairy farmer from Ballydehob in west Cork. He graduated from Darrara Agricultural College in 2005 and spent part of his time in college on placement in New Zealand.

He is a member of Caheragh Macra in Carbery since 2006. He has been club chair, public relations officer, secretary and treasurer in this time. He was also elected secretary of Carbery in 2009.

In 2014, he was elected as Carbery’s national council representative and served two years in that position. He also served on Macra na Feirme’s agriculture affairs committee including a year as vice-chair of the committee.

As a dairy farmer, he found the committee very beneficial and has seen firsthand the work it does for young farmers.

She has been living and teaching in Naas, Co Kildare, since 2012.

She says: ‘‘My most challenging and rewarding teaching role was working as a special class teacher for three years, teaching children with autism.

“This was a fantastic experience and it enhanced my knowledge and understanding of children with special needs.’’

Cara co-founded Naas Macra in 2014 and was elected chair. She has taken on numerous roles within the organisation at both local and national level and has been the NCR for Kildare since 2014.

She was also elected on to the national executive last May.

Since 2015, she has held the position of chair of the rural youth committee, which is a diverse and enjoyable role.

Speaking about Macra na Feirme, Cara says ‘‘I have seen people grow and develop as a result of joining Macra.

It is more than just a social organisation. The six programme areas lend themselves to developing confidence, social skills and personal skills for members.

“Macra has given me a perspective on life outside of my career. I have met some fantastic people and been a part of some interesting experiences. I also love music, sailing and drama and am an active member of my local drama club,” she said.

Prior to receiving their awards, the winners went through a challenging interview process conducted by Elaine Farrell of IFA, former Macra na Feirme President Sean Eustace and Stephen Hardcastle from the ABP Food Group.

Speaking on behalf of the sponsors, the ABP Food Group, Hardcastle said the judges were impressed with the standard of candidates and found it extremely difficult to select the three winners from the final six.

Deirdre Kennedy, Padraig O’Driscoll and Colm Taylor were the other finalists in the National Leadership Awards Competition.