Domestic milk intake up 22.2% in April

Domestic milk intake by creameries and pasteurisers was estimated at 694.9 million litres for April 2014. This was 22.2% above the corresponding 2013 figure according to the Central Statistics Office (CSO).

This is according to DairyCo which also notes that daily milk intake for this period were 2.6m (6.4%) higher compared with the three-year average.

The increase comes despite off a cold snap over the May period which saw production fall off.

DairyCo also notes that the top six EU milk-producing countries (France, Germany, Italy, Netherlands, Poland and the UK) saw their collective production increase by just over 3% in the 2013/14 milk year, compared to 2012/13.

Eurostat figures show that Germany, Netherlands, Poland all saw record milk production. Conditions for EU farmers were favourable for the majority of 2013/14 with high milk prices, lower input costs and improved weather, although some countries will be subject to superlevy. 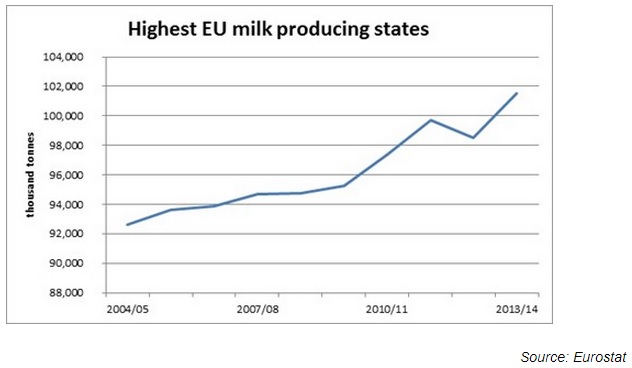