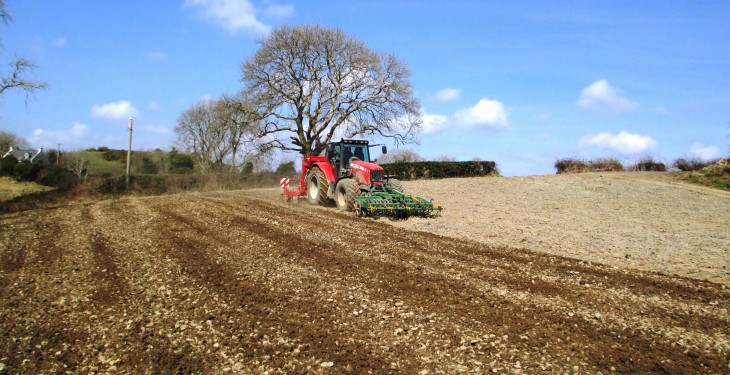 The latest crop management notes from the Department of Agriculture and Rural Development (DARD) in Northern Ireland.

Advertisement
Cereal
A cooler January and February has held forward crops at bay, simplifying spring management. Once field conditions allow, winter crops will require their first nitrogen (N) application. Aim for one third of total N during late tillering (mid-March for winter barley, mid/late March for winter wheat).  Apply the remaining N balance during early stem extension, Growth Stage (GS) 30-32; early/mid April for winter barley and by late April/early May for winter wheat.
In continuous arable rotations where organic manures have not been applied, withholding 30-40 kg per hectare N until the flag leaf emergence GS 37 may be beneficial. Remaining P and K requirements should be applied now based on soil analysis.
Northern Ireland is widely considered sulphur deficient, with highest risk where soils are light and rainfall low. Apply 20 kg per hectare sulphur either as nitrogen containing ammonium sulphate or if potash is required as sulphate of potash to winter cereals.
Remaining grass weed herbicides should be applied to winter cereals preferably before annual meadow grass reaches tillering. Consult product labels carefully for cut-off dates and growth stages.
Disease control
Disease is already active in earlier sown crops of winter barley. These lush crops may benefit from a T0 fungicide to reduce pressure on the main T1 spray. All winter barley crops require a robust T1 spray in late March or early April at GS 30-31 to control Rhynchosporium and mildew. Keep dose rates high particularly if T0 has not been applied.
Similarly in lush winter wheat crops a T0 application of a protectant product helps reduce pressure on the T1 spray at GS 31-32, normally applied around mid/late April. If yellow rust is a threat the addition of a triazole with good rust activity should help at T1. Further details to help plan your programmes, including growth stage charts and HGCA fungicide decision support charts can be found on the crops section of the DARD website.
Spring barley drilling
Sowing should take place as soon as a good seedbed can be created. The chosen seed rate, calculated from the thousand-grain weight, lies between 350 and 400 grains per square metre. The lower rate should suffice for March sown barley drilled into a good seedbed, the higher rate is preferable in poorer conditions or for later sowings. Monitor spring sowings for signs of slug and leatherjacket damage particularly if emergence is delayed due to cold conditions.
Potatoes
Early fertiliser
By now most fields intended for potatoes should be soil sampled. Where there is a high K requirement it is advisable to apply immediately after ploughing, particularly where muriate of potash is the main source.
Seed preparation for planting
Attention to detail during handling and preparation of seed prior to planting can result in increased early tuber yield whilst optimising fry colour and skin quality.
Carefully check the seed as it arrives on farm and have samples hot boxed to determine the presence of disease and overall sprouting vigour. Treat seed with a fungicide pre-planting to reduce disease transmission and maximize marketable yield.
Sprouting and chitting
Pre-sprouting systems (bag or tray) must ensure adequate temperature, ventilation and light to control sprout growth and protect against frost. Set seed from early varieties in sprouting boxes aiming to promote apical dominance, that is, producing one strong sprout per seed tuber. The opposite holds for maincrop potatoes where multiple sprouting is encouraged to produce many tubers which can increase in size over a longer growing season.
Mini-chitting
This system of seed preparation aims to produce seed tubers with sprouts no more than 2 mm long. Store seed at 3-4 oC until seven to 10 days pre-planting, when the refrigeration unit is turned off allowing chitting to occur. Plant seed once 1-2 mm sprouts have formed. If planting is delayed re-cool seed to 3-4oC preventing further sprout growth. Although later harvested than pre-sprouted seed, mini-chitting produces a crop that emerges quickly and evenly.
Potato
Loading Next Story