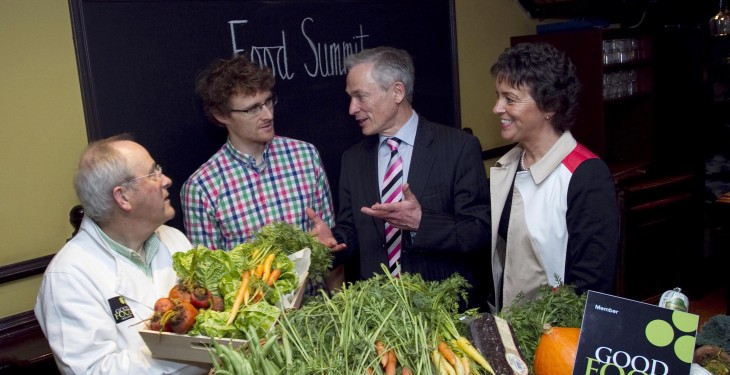 The Food Summit, the largest food showcase in Ireland, was this afternoon launched by the Minister for Jobs Richard Bruton in Dublin.

The inaugural Food Summit is a partnership between the Web Summit and Good Food Ireland who have teamed up to treat more than 10,000 guests to the best of Irish food next week at the sold-out Web Summit.

The event will feature chefs from Ireland’s top restaurants and hotels as well as artisan food producers from across the country. The Food Summit, run in association with Good Food Ireland, will coincide with the Web Summit, Europe’s largest technology event and festival of ideas.

The event sold out last week and has guests that include the founders and CEOs of billion-dollar tech companies such as Skype, Hailo, Evernote, Box, Dropbox, technology start-ups, international media and investors attending from more than 90 countries in Dublin next week.

Over the two days guests will be treated to 400,000 tastings of food and drink at the Food Summit in Herbert Park, which was chosen in honour of the Park hosting the Irish International Exhibition in 1907, an event which attracted two million visitors that year.

Speaking at the launch Minister Bruton said: “The Web Summit is a hugely positive event for Ireland, with thousands of entrepreneurs including some of the most powerful people in the international tech industry getting first-hand experience of all Ireland has to offer. My department along with its agencies are determined to take full advantage of all the opportunities this offers Ireland in terms of investment and jobs. Today I am delighted that the Irish food industry is also taking full advantage of this opportunity, to showcase all we have to offer to this international audience.”

Paddy Cosgrave, CEO of Web Summit, said: “Ireland should be the world’s food capital. No other nation produces more food per capita than Ireland and the food we produce is of an exceptional quality. Yet very few of our more than 400 international journalists would ever associate incredible food with Ireland. We are going to change that.”

Speaking at the launch today and ahead of what will be their biggest ever event, Good Food Ireland founder Margaret Jeffares said: “Good Food Ireland has become the icon for authentic food experience in Ireland, through its 600 plus businesses’ shared philosophy and commitment to using local food. If anyone can change the international attitude to the food experience in this country we can.”

More than 60 Good Food Ireland-approved businesses from the four corners of Ireland will provide guests with tastings of Irish food from some of Ireland’s top chefs, bakers, farmers, cheese-makers and fishermen, as well as beverages from top artisan craft brewers and juice-makers. Over the two days guests will be treated to 400,000 tastings of food and drink.

Tickets for the event sold out last week. A final 100 extra tickets will be made available on Thursday October 24th at websummit.net.