A ‘land mobility’ programme aiming to pair up farmers into working partnerships and solve the problem of access to land has been launched in Northern Ireland.

A similar scheme has been running in the Republic of Ireland for several years already, but this is the first time the scheme has come to the North.

The Land Mobility Programme has been engineered as a solution to problems created in the industry by poor succession planning.

At a time when young farmers complain of trouble finding land and issues with short-term leases, many older farmers are also looking at opportunities to reduce their workloads or even retire from the industry.

What is the Land Mobility Programme?

It is a scheme to allow younger farmers access to the industry through formal agreements between farmers to work together on one project – usually a younger farmer and an older farmer, although there is no age restriction for who can get involved.

It could take the form of a share farm agreement, a leasing arrangement, contract rearing or an older farmer acting as a mentor.

According to Young Farmers’ Clubs of Ulster (YFCU), 55% of farmers have no successor – and the figure is similar across the rest of the island, the land mobility scheme is designed to give these businesses a working arrangement for the next generation.

Land mobility may appeal to both ends of the scale: older farmers looking to retire or cut back their work load and younger farmers who don’t have the access to land or the facilities they need to start in the industry.

The agreements are flexible and along with your solicitor and the Farm Mobility Programme manager you can come up with something that works for both parties.

What do you need to put in?

There are five ingredients to every agreement: you can put in a combination of labour, livestock, land, capital or sheds.

Profits for the business are then split between the partners depending on who put what in. Partners can put in any combination, for example one partner could provide half the cows, half the labour and no sheds or land while the other provides the other half of the labour and cows, as well as all of the land and sheds.

What do you get out of it?

Each agreement will be different, but as a starting point it has been suggested whoever provides the land receives 25% of the profits; 20% for the sheds and capital; 20% for the cows; and 35% for labour.

The proportions for each can change depending on the individual situation.

Anyone who wants to work with another person – there’s no age limit. The agreements are legally binding so there should be serious consideration put into whether it’s right for you before you sign up.

What happens if there is a disagreement?

Termination clauses should be built into the contract. Programme manager John McCallister explained that the “idea would be that everyone leaves with what they put in”.

He also suggested in the first instance that mediation should be taken with a third-party as soon as an issue arises.

What happens if a partner becomes ill, or even dies?

It could be written into a contract that whoever inherits the farm in the case of death would continue to honour the agreement. It largely depends on what conversations both parties have with their families before the details of the agreement are finalised.

Can the agreement be extended?

Yes, but this will need the agreement of both parties.

And what about subsidies?

These can be paid into the business account and split between partners, but each situation will be unique – depending on what is negotiated between the partners.

The landowner should continue to count as an active farmer as part of the share farm agreement.

Can one partner eventually buy out the other?

Not as standard – but if both parties wanted this it could be built into the agreement.

What support is there?

The Land Mobility Programme manager is the first point of contact. John McCallister can be contacted on: 07833 668602.

YFCU and the Ulster Farmers’ Union (UFU) are also behind the scheme, so may be able to provide additional assistance. 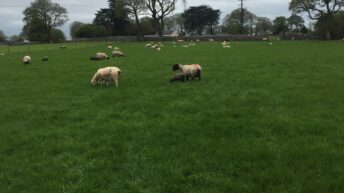