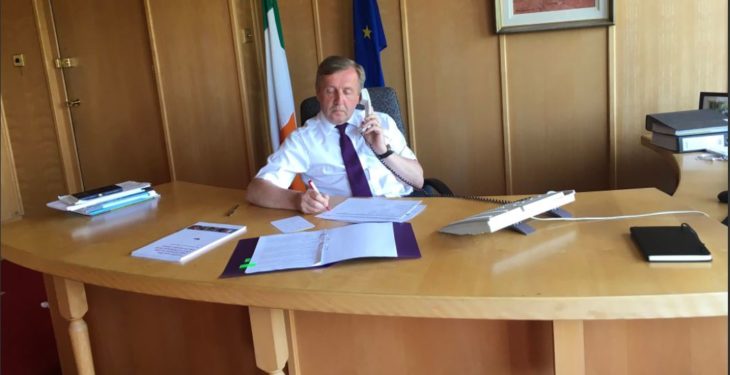 Rumblings from Europe of an incoming limit to direct payments would be welcomed by the government, Minister for Agriculture, Food and the Marine, Michael Creed, has said.

According to leaked documents from the EU Commission’s Agriculture Directorate General, proposals on capping farmer payments under Pillar I, at between €60,000 and €100,000 – down from the current €150,000 level – are being considered.

The draft paper also indicates that, under Common Agricultural Policy (CAP) reform post-2020, more funds will be aimed at those who “rely on farming for a living”, greater supports will be made available for smaller farmers and more emphasis will be placed on environmental initiatives.

Speaking to AgriLand, Minister Creed said he would support such changes.

I’m not concerned at all about caps. We tried in the last CAP, to have a lower limit than is currently provided for and in that context I welcome the fact that the EU Commission seems to be open to reconsidering that.

“I’m very slow to get into commenting on documents that I haven’t seen in detail, these are leaked documents, but if that is the direction of travel it is certainly something I, and the government, would welcome. EU Commissioner for Agriculture, Phil Hogan, appears to be more open to travelling further along that road now.

“I don’t think part-time farmers have anything to fear in that context, part-time farming is part of the fabric of rural Ireland now,” he said.

Fine Gael MEP and vice-president of the European Parliament, Mairead McGuinness said the proposal will go through various rounds of meetings in the commission, and elsewhere, before any decision is reached.

“The reaction has not been enormous because it is only a discussion document. Previously, Ireland wanted capping, in fact we managed to get it through the negotiations, where as the member states were against it by and large.

The levels are interesting, if you go with €60,000 what about partnerships? Or indeed some farmers with high payments might look at trying to manage their payment amongst family members so they don’t get caught, that’s always an issue.

McGuinness also warned that some farmers might seek to divide holdings in a certain way, so as to benefit from such limitations.

“It’s going to need a lot of debate and discussion. It’s about the discretion of how we define small farmers, large farmers, active farmers. When it comes to supports, trying to get a fair system is going to be extremely difficult, every single farmer will view the proposal on how it will affect their pocket.

You might be a part-time farmer who is a barrister, or an MEP, or a government minister, or the owner of a newspaper. There are very many people with significant off-farm incomes who farm and they do it because of their connection to the land and by choice; we have to be careful around the emotion of the words.

Currently 80% of direct payments go to 20% of farmers in the EU.

Farm income continues to be highly reliant on direct payments. In 2016, the average total payment was €17,932 and this accounted for 75% of farm income on average, according to Teagasc.

The highest single payment was issued to the owners of O’Shea Farms in Piltown, Co. Kilkenny; they received a payment of €244,693.

Rounding out the top three highest CAP beneficiaries for 2016 was a farm owned by Greenhills Windfarm Ltd in Cobh, Co. Cork; a payment of €225,681 was issued to the owners of the company.

Further calls for a fairer spread of CAP payments post-2020