Lamb quotes are currently sitting at 470c/kg but there is an expectation among factory buyers that prices could fall as the week progresses.

The past two weeks have been a busy time at Irish sheep processing plants as factory buyers sought stock to meet orders for the Muslim festival of EID.

The increased demand surrounding EID lead to some improvement in Irish lamb prices over the past fortnight, with prices improving by 10c/kg, but procurement managers expect prices to dip due to weaker demand in the coming days.

Most factories only offered quotes for the early part of the week and the general consciousness among buyers is that prices will decline as the week progresses.

Some factories reported a doubling of sheep supplies in recent weeks, but they have insisted that there are still plenty of lambs available on the market.

This plentiful supply of lamb combined with weaker market demand for sheepmeat are the two main reasons why factory buyers have predicted that prices will ease in the coming days.

But despite the negative vibes coming from buyers, cast ewe prices have remained similar to last week with most plants offer 230c/kg for well-fleshed cast lots.

Sheep supplies up 10% in the space of a week

According to Department of Agriculture, sheep supplies jumped 10% during the week ending September 4 compared to the week before.

An increase in spring lamb slaughterings accounted for the majority of this increase, with the spring lamb kill up by just over 5,200 head compared to the week before.

Along with an increase in spring lamb supplies, hogget and ewe throughput also climbed by 50 head (84.7%) and 217 head (2%) respectively.

Figures from the Department of Agriculture also show that an additional 9,167 sheep have been slaughtered at approved sheepmeat export plants so far this year.

But, spring lamb supplies continue to lag behind 2015, with 72,604 fewer spring lamb slaughterings in Irish plants so far this year. 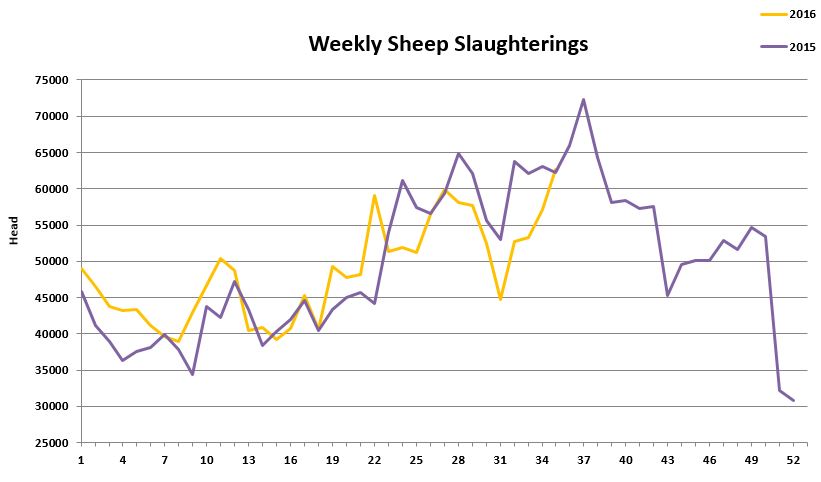 According to Bord Bia, some recovery in the supply of lamb is resulting in an ease in prices in Britain.

The SQQ live price for lamb in England and Wales was making the equivalent of around 468c/kg last week, almost on par with Irish prices.

Lower activity has also been reported on the French market, it says, due to slow demand and plentiful supplies of competitively priced UK lamb on the market.

Meanwhile, retail promotions have focused on fresh and frozen imported and domestically produced sheepmeat including forequarter, steaks, legs and chops.