Lamb quotes have taken a tumble today with most plants now working off a base price of 450-460c/kg for today’s kill.

Earlier this week, procurement managers suggested that lamb prices would fall as the week progressed due to falling demand and difficult trading conditions for sheepmeat on the major markets.

On Monday, factory buyers were working off a base price of 470c/kg but with rising throughput numbers and the passing of the Muslim festival EID prices have weakened considerably.

The Muslim festival of EID, which took place on September 11-12, seen a rise in the demand for Irish lamb but since the festival has passed procurement mangers have said demand has eased.

A number of lamb buyers have also said that lamb supplies have continued to hold up this week despite the passing of the peak period for Irish sheep slaughterings.

However, despite the fall in spring lamb quotes, ewe prices are holding up relatively well with most processors now working off a base price of 230-240c/kg.

According to figures from the Department of Agriculture, almost 65,000 lambs were slaughtered in approved plants during the week ending September 11.

However, despite the increase in spring lamb numbers, both hogget and cast throughput dropped last week.

Official figures show that ewe and ram throughput fell by 40% or 4,356 head last week and while only a small number of hoggets were slaughtered, throughput of these lots declined by 12% or 14 head. 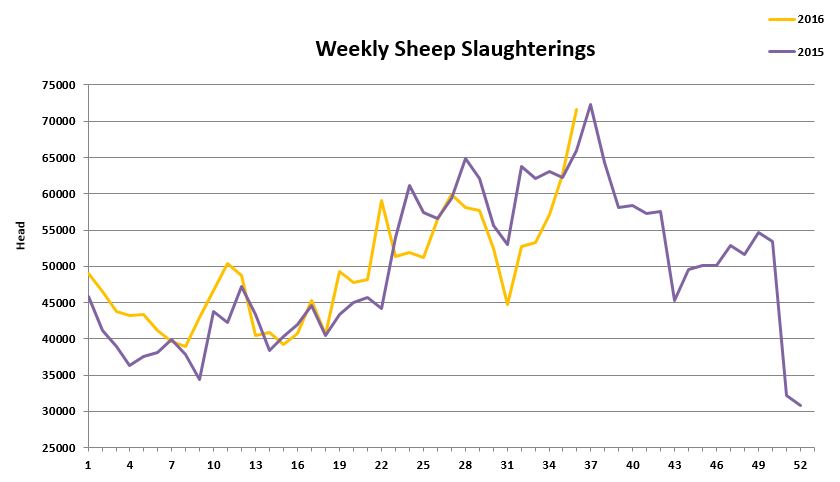 “Lamb prices have come under some pressure in recent weeks with the ending of the EID festival but that is no reason for factories to take advantage,” he said.

The ICSA would warn processors to be cautious about imposing price cuts, he said, as farmers have used the good prices in both factories and marts to market lambs in recent weeks.

“With all these extra lamb supplies that have been seen recently lamb supplies should not be excessively strong in the coming weeks,” he said.