There has been a good deal of movement in the sheep factory trade this week, with some processors easing off with the price cuts they introduced last week.

Last week, procurement managers moved to drop spring lambs by 10c/kg, with most operating off a base price of 440c/kg.

However, a number of procurement managers have increased the quoted price for this week by 5-10c/kg.

Kepak Athleague lead the pack in terms of base price and are currently offering 450c/kg for lambs, while Kildare Chilling are working off 445c/kg.

Meanwhile, the two Irish Country Meats’ plants have maintained prices at last week’s level and are currently offering 440c/kg for lambs up to 21.5kg.

Lamb buyers have described the trade as difficult, with strong supplies of UK lamb and a weaker Sterling having a negative impact on the trade.

Looking at the ewes, in previous weeks, 240c/kg was widely available for ewes, but factories are now quoting 225-230c/kg for suitably well fleshed lots at present.

Lamb throughput numbers continue to climb as supplies have jumped by almost 10% in the space of a week, recent figures from Bord Bia show.

According to Bord Bia, just over 46,600 lambs were slaughtered in approved sheepmeat plants during the week ending October 1.

Meanwhile, figures from Bord Bia also show that the number of cast ewe and ram slaughterings has also increased, with slaughter numbers up 2.1% or 259 head on the week before.

Following the jump in lamb and cast ewe and ram slaughterings, the weekly sheep kill also rose with total throughput jumping by 4,368 head or 8% on the week before.

According to Bord Bia, slower demand coupled with a rise in supplies is leading to downward pressure on prices.

The SQQ live price for lamb in England and Wales was making the equivalent of around 424c/kg deadweight last week.

In France, the market continues to remain slow, it says, mainly due to reduced consumption.

French lamb in short supply – But what does it mean for Ireland? 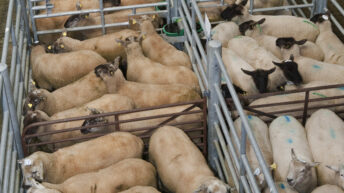