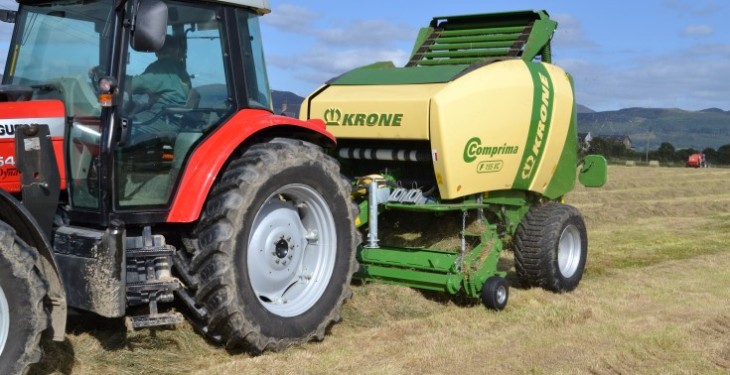 The Krone Comprima is officially the fastest roundbaler in world with 149 straw bales in 1 hour.

“Krone has a 5-row camless pickup that runs 30% faster than anything else on the market.  That’s why the Krone Comprima is way quicker than the competition” says Farmhand sales director, David Borland.

“For the last two years we have been concentrating on the F155, which can make bales from 4ft up to 5ft size. More and more farmers are looking to save costs; the F155 can not only make a much tighter bale but can also make it bigger than anyone else. That means less plastic, less handling and less waste.”

“When the chamber is empty it’s 3ft diam. And when you start baling you fill and pack the 3ft chamber first and this gives you a very tight core, even at high forward speed. Then the chamber increases as the bale is tightened up to over 4ft, even 5ft if required.

“Fixed chamber balers only tighten the bale from the outside in when the bale is fully formed – the centre can never be as tight as the Krone Comprima . Farmers are saying the tighter bales result in better silage quality and last better; some report that 3 (4ft) Comprima bales last as long as 4 made with a roller baler.”